My child loves computers, but I don’t know where to go from there! It’s a common problem for parents today. Our children are often leaps and bounds ahead of us when it comes to technology. It can be challenging to know how to help them learn more, especially when we don’t know much ourselves. But there is no need to fret. There are quite a few computer kits out there that can help your child really dig into computers and technology.

Two of the most popular sets today are the Kano Computer Kit and the Piper Computer Kit. On the outside, these machines are very different, but their goal is the same – to help children learn more about computers.

What are the Differences Between Kano & Piper?

At the heart of each kit is the ability for your child to build their computer. As you would imagine, this makes the actual building process very important. With Piper, you and your child will use a screwdriver to build the outside of the computer and put the electronics together. The blueprints are almost entirely graphic in nature, making it easy for children to follow.

A key part of building Piper that kids universally love is constructing the box that the Piper Computer will ‘live’ in. In fact, most kids a really drawn to this – it makes their new kit feel like a cross between their own laptop and a sophisticated toy box, since the additional electronics components are also stored there.

With Kano, the build process is a little different, but it does use a story-based approach to teach children the ins-and-outs of how the computer works. Since children often learn best through story, this approach can help them effortlessly learn about the inner workings of computers.

The Kano computer kit comes with tons of coding games and apps already loaded into the system. It comes with Kano OS, a child-friendly operating system based on Linux, pre-installed. Once your child builds the computer, they can begin playing these apps and learning about coding as well. Kano also comes pre-loaded with Google’s song maker, Minecraft, and other educations applications. It is also functional as a regular computer. In fact, since it is based on a Raspberry Pi 3, other operating systems can be used with the kit by simply writing them to other flash cards and booting from them.

The Piper computer allows children to “upgrade” their equipment through various missions. It also comes pre-loaded with a special Minecraft edition as well as a few other games. Because of the Minecraft theme, Piper might be especially fitting for younger children who enjoy Minecraft. A really special feature of Piper is that the kids are given “Missions” that involve connecting electronics components to Piper and then these components allow them to interact with the game and progress. We love this blending of the physical and digital worlds – it is a fun and highly engaging way for kids to learn how modern technology works!

This is a significant area where these computer kits differ. Kano comes with a full wireless keyboard that has a built-in trackpad. Piper comes with a mouse and no keyboard. Instead, Piper includes a number of electronics components that can be used with Piper Missions – STEM-based projects and activities that blend the digital world in Piper with the physical world via electronics. It’s a great way to learn a blend of electronic and software engineering! However, because of the lack of a keyboard on the Piper computer, you can’t use online applications like Code Academy or YouTube very easily out of the box. The latter may well be a positive feature, according to many parents who find their kids spending far too much time on YouTube! Nevertheless, Piper (and Kano) is a fully-fledged computer system, so you can easily add a USB or Bluetooth keyboard.

How to Decide Between Kano and Piper

For younger children, we recommend the Kano. There is slightly less to assemble, and Kano has designed their kit to be suitable for children 6 and up. We would note that for both kits, there will need to be some adult assistance for younger kids who are not yet confident readers. This system does an excellent job of teaching the basics and engaging children in STEM concepts who might otherwise not be interested. Also, because the Kano includes a keyboard, it may be a more familiar device for children who have used mom or dad’s computer, or one at school, before.

The Piper involves more construction — including the carry box that makes it so portable! Building the Piper Computer Kit is a very tactile experience for kids. Also, once built, the inclusion of electronic components, means that the Piper continues to encourage physical-based STEM skills and learning alongside the digital. For this reason, Piper recommends their kit for kids aged 8 and over. 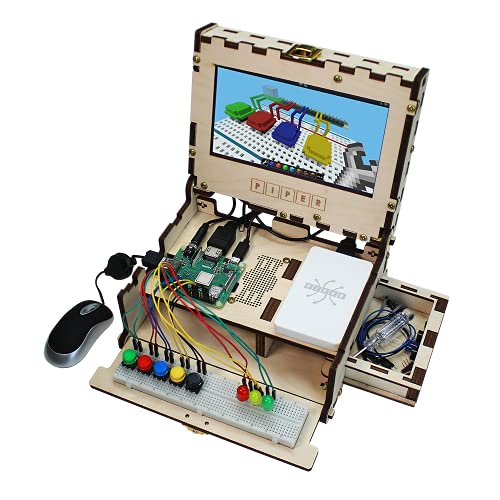 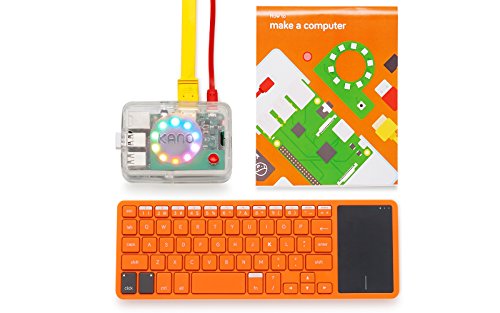 Kano Computer Kit – A Computer Anyone Can Make
New - learn to code with 100's of creative challenges and stories , Voltage - 5 volts; Make art, games and music. Hack Minecraft to do something new.
$399.00

Kano recently launched a buildable touchscreen tablet computer which is more similar to the Piper in that it includes a screen in the kit. The Kano Computer Kit Touch is priced similarly to Piper, and uses many of the same components and a similar build process to the regular Kano Computer Kit. However, unlike Piper, after the initial build, there are relatively few electronics components that can be connected to the Kano kit and used in projects and play. For this reason, we still prefer the Piper Computer Kit if you are looking for a Build-Your-Own computer kit that includes a screen. We also love the carry box that kids build for their Piper!

What is the Piper Computer Kit?

The Piper Computer Kit is a build-your-own computer kit based on Raspberry Pi 3. Users construct a portable box to house the computer and then assemble the computer from the components, learning valuable STEM skills along the way. Once assembled, the Piper Computer Kit includes a variety of learning experiences that incorporate electronics components that are connected to the computer and allow interaction with story-based missions in a special version of Minecraft.

What is the Kano Computer Kit?

The Kano Computer Kit is a build-your-own computer kit based on Raspberry Pi 3. Kids learn the various components of computers and how they are put together. Once assembled, the Kano Computer kit can be connected by HDMI to a monitor and runs Kano OS, a child-friendly, Linux-based operating system.

Is Piper a Raspberry Pi kit?

Yes. The Piper Computer Kit 2 is based on Raspberry Pi 3.

Is Kano a Raspberry Pi kit?

Yes. The 2018 edition Kano Computer Kit is based on Raspberry Pi 3.

What is a Raspberry Pi?

Raspberry Pi is an inexpensive computer that uses a Broadcom “System on a Chip” (SoC). It contains all the components for a functioning computer on one credit card-sized board.

What is the best Raspberry Pi kit?

The best Raspberry Pi kit depends on the use-case. Very simple kits can include just the Raspberry Pi, plus optional power supply and protective case. Raspberry Pi kits also often contain a memory card that has an appropriate operating system pre-installed. More sophisticated kits can include a variety of other components and guided learning experiences. In this category, we are particularly fond of the Piper and Kano Computer Kits, which are designed to teach kids about how computers work, by getting them to build their own!