There’s more to the world of tabletop games than Monopoly and Trouble — much, much more! Area control board games, like classic Risk, are just one type completely changing family game night as we know it.

If you’re looking for the king of all area control games, you can’t go wrong with the award-winning Scythe. There’s no denying this heavy-weight title offers everything a hardcore tabletop gamer could want.

But don’t worry… whether you’re on the hunt for light-hearted family fun, hours-long play sessions, or something suitable for young children, we’ve found an area control board game you’re sure to love!

Related post: The Best Educational Board Games for All Ages 2022

Best Area Control Board Games in 2022 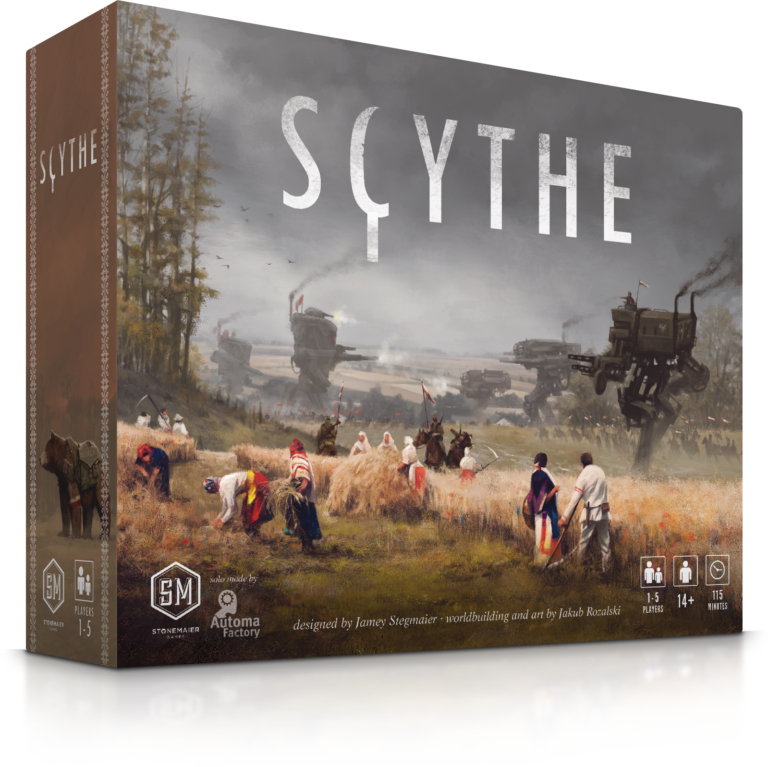 In the world of gaming, area control and war go hand-in-hand. Scythe, however, takes place after the initial conflict has already ended.

Set in an alternative version of our own history, Scythe places each player at the head of a fallen faction as it struggles to rebuild following the Great War. Though these factions are heavily inspired by real East European countries, the game introduces an element of fantasy in the form of mechs (giant, industrial war machines).

To win the game, players must be willing to think strategically and plan ahead. Aside from random encounter cards and combat power-ups, Scythe leaves nothing up to chance. The game can accommodate up to five players, but there’s also a one-person mode for solo gameplay! 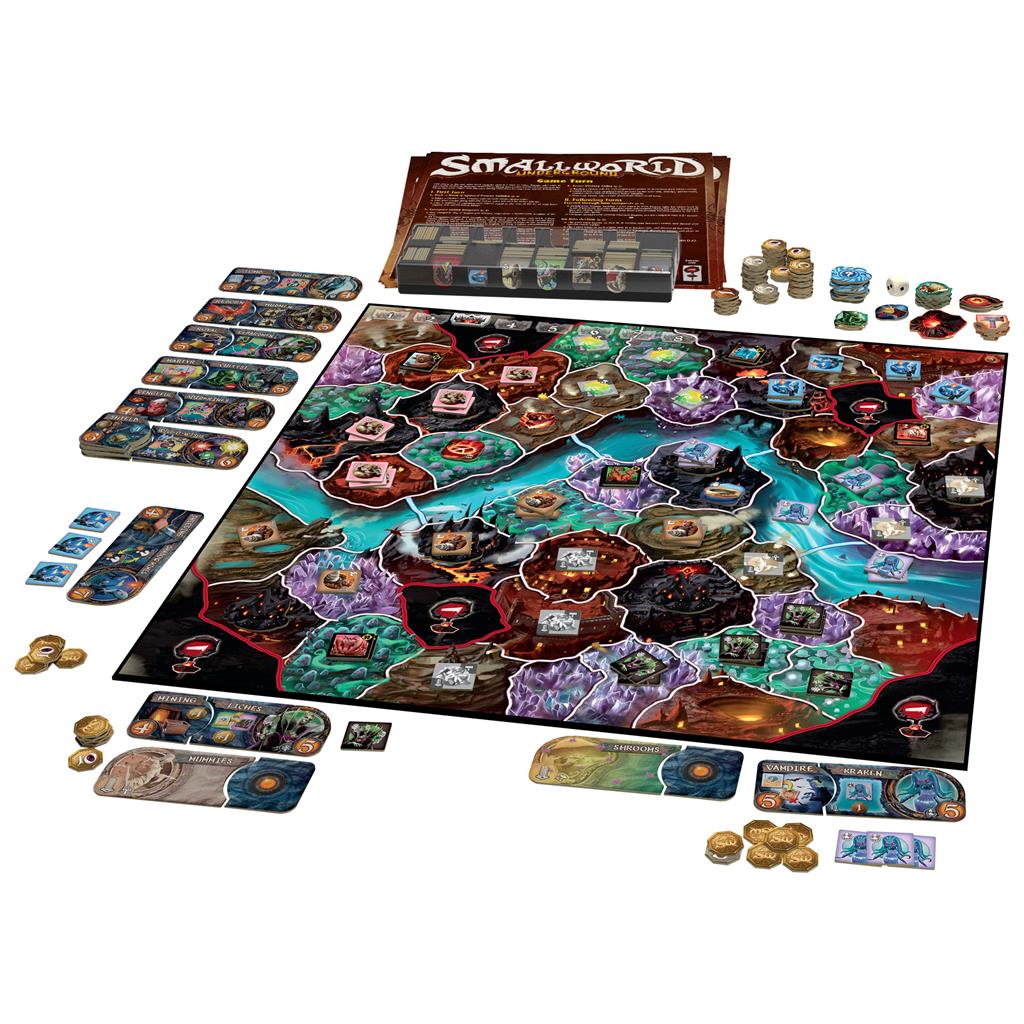 Combine fun fantasy races with unique special powers in a quest to claim a share of this tiny underground world.

Inspired by the countless global conquest games before it, Small World brought a fantastical twist to the area control genre. In this game, players must lead mythical races — Elves, Dwarves, Tritons, and many more — on a quest to claim new territory. But, as the name Small World implies, there’s not quite enough land to go around.

Along with its easy-to-learn ruleset and fun concept art, Small World’s replayability really helps it shine. The core game includes 14 races and 20 special powers. Add in the game’s available expansion packs (with more likely to come), and you get 20 more races and 25 new abilities. When you do the math, that’s 1,530 totally unique combinations!

Unfortunately, at the time of writing, this game is difficult to find! However, Small World: Underground is a standalone sequel that retains the majority of the original’s rules. It adds some extremely interesting new twists, including Monster-occupied regions, Relics, and Places of Power! 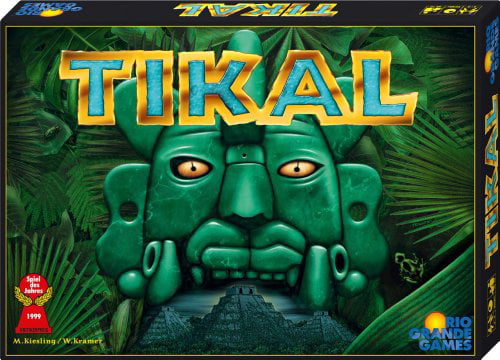 Race to discover and retain control of ancient Mayan temples before competing adventurers get the chance.

In Tikal, exploration is the name of the game. Acting as the director of an archaeological expedition, each player must race to discover and retain control of ancient Mayan temples before competing adventurers get the chance.

Players spend action points each turn to earn points and progress the game. Potential actions include building a campsite, pushing deeper into the jungle, or stealing control of a discovered temple from an opponent. After the game’s three scoring rounds, the explorer with the most points is crowned the winner.

With its recommended age range of 10 years and up and minimal setup time, Tikal is an excellent way to dip your family’s toes into the world of area control board games. 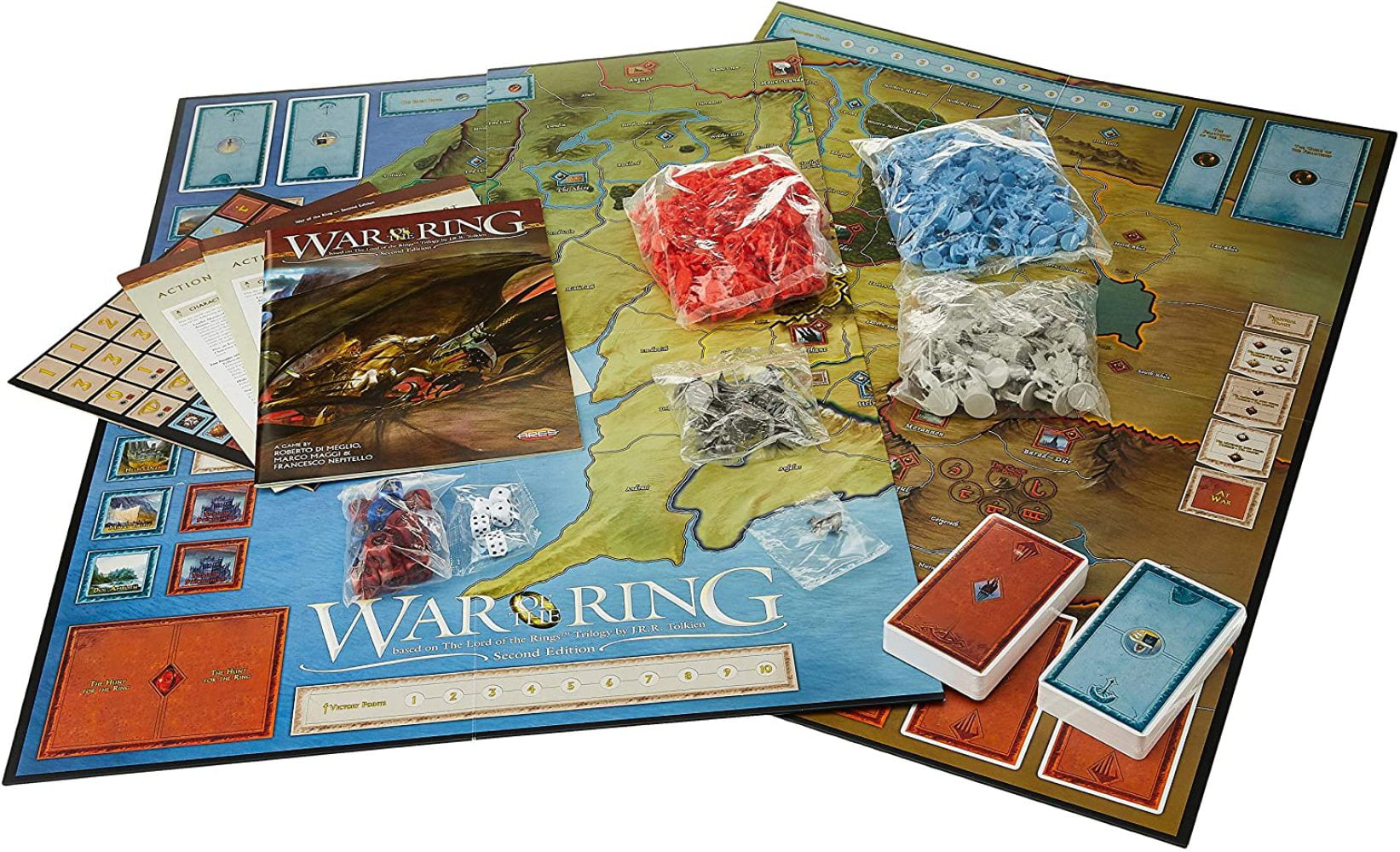 War of the Ring: Second Edition

As the Fellowship travels to Mordor, players take control of the Free People or Shadow Army to determine Middle Earth’s ultimate fate.

If you’re looking for dense gameplay with lots of adventure, look no further than War of the Ring: Second Edition. Taking place during the Fellowship of the Ring’s journey, this game gives players full control over a war-torn Middle Earth.

Players use action dice, event cards, and area control mechanics to lead each respective army. Along the way, players will even determine the fates of beloved characters like Frodo and Aragorn.

Since there are only two “sides” in War of the Ring, four-person gameplay does require players to work together as pairs. This is one of the game’s biggest criticisms, but it’s actually a great way to include younger children without overwhelming them with complicated rules and hours-long game sessions. 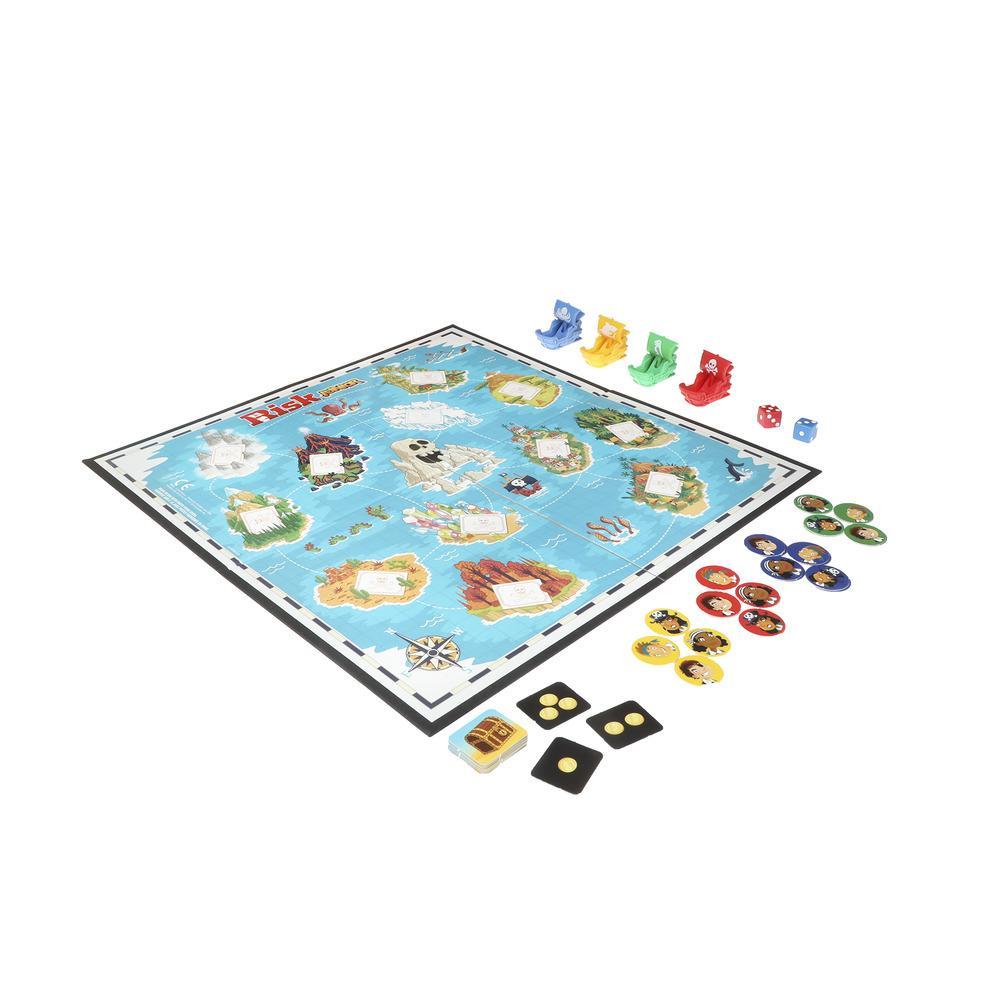 Pay homage to the original Risk board game as you sail the high seas, dig up treasure, and defend your islands from other pirates.

With its release in 1957, Risk practically invented the area control genre. The original will always be a favorite among older children and adults, but Risk Junior is one of the best titles for young kids interested in building up to more complex tabletop games.

In Risk Junior, players ages five and uptake the helm of their very own pirate ship. Players must use strategic thinking to conquer islands and collect the most treasure. To steal or defend an island and its treasure, players get to launch dice from their pirate ships like cannons — the highest roll takes (or keeps) the loot. 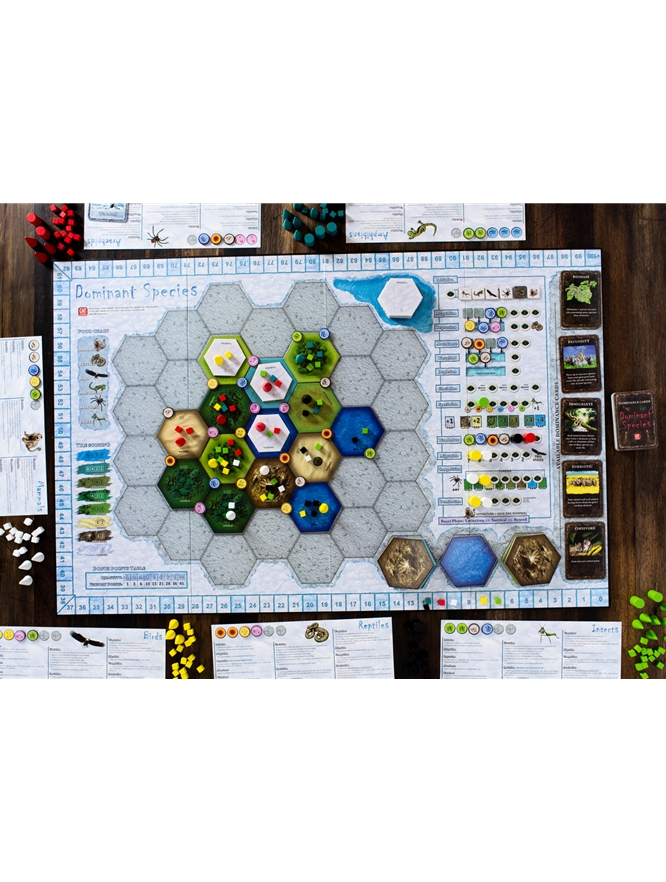 Learn to adapt, migrate, and dominate other species to survive the oncoming prehistoric Ice Age.

When you break them down, most area control games revolve around placing people on a map. Dominant Species puts an original twist on this mechanic by having players determine an entire class of prehistoric animals’ fates.

At the start, these classes live in mutual harmony. Yet as valuable resources become sparse, it quickly becomes clear they must compete to survive.

To say Dominant Species encourages cutthroat competition is a massive understatement. This game involves a ton of direct conflict between players — sore losers beware. Those who are willing to do anything to see their animal class survive will enjoy hours of engaging drama and tension, unlike any other board game in the genre. 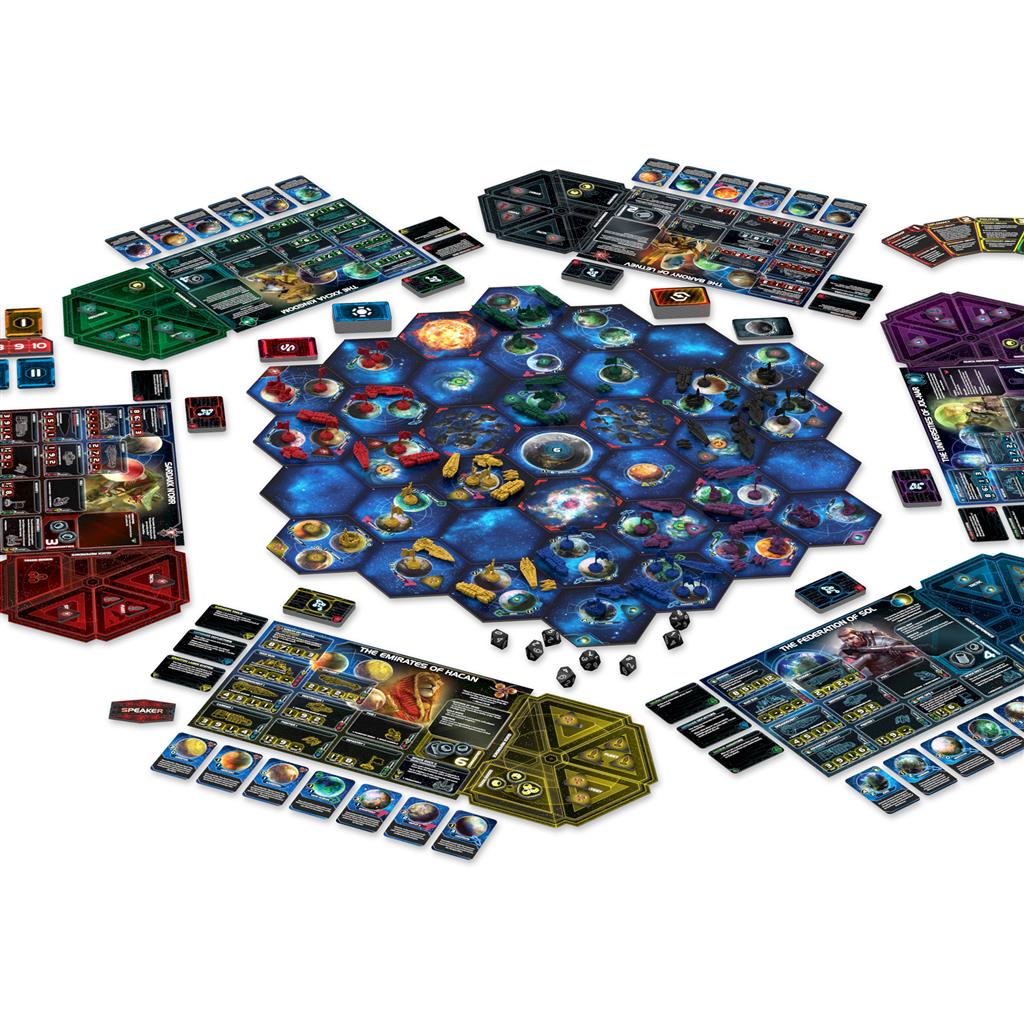 As one of the most popular board games right now, Twilight Imperium (Fourth Edition) showcases the true potential of area control gameplay.

Much like Scythe, players are asked to lead various factions as they scramble to claim parts of a fallen empire. Instead of farming villages and industrial mechs, however, Twilight Imperium offers intergalactic war, alien races, and sci-fi fantasy as its setting.

Each intergalactic faction utilizes entirely unique gaming mechanics, creating a different experience for every player. Plus, thanks to the use of interchangeable hex tiles, no two game boards are ever the same. Learning how to set up and play Twilight Imperium can certainly take a while, but the pay-off is well worth it.

What to Consider When Buying an Area Control Board Game

Few tabletop games rely on a single gaming mechanic. While the games we’ve shared all focus on area control, they still use other gameplay mechanics.

Some game mechanics you’ll find in almost every game include dice-rolling, drawing cards, and action points. The more complex a game is, the more likely it is to incorporate multiple mechanics.

Every board game released by a major publisher comes with a suggested age range. These ranges help parents and caregivers choose games that are appropriate for their children without needing to play the game themselves.

When choosing which game to play, knowing the estimated playtime is extremely valuable. The last thing you want is to start a three-hour game when you only have two hours to actually play.

Knowing the average playtime for a specific title can also help you make purchasing decisions. Naturally, games for younger children have shorter playtimes. But if you know your kids will only sit for an hour-long game, you can double-check the estimated duration of a game before you spend any money.

Along with listing the average playtime, more complex board games may list the estimated amount of time needed to set up the game. Many of these games require building the map, selecting special abilities, or divvying out lots of small play pieces. These steps can rapidly add up, especially when playing a title for the first time.

Before adding a new board game to your collection, make sure you have enough (but not too many!) people to play. While many games work with a wide range of players, others will only work with a particular number.

Another unique feature of some board games is the option to play with only one player. Usually, these games let you play “against” the game, similar to a game like Solitaire. Some use special rules for solo-play while others stick with the exact same mechanics used during multiplayer games.

Is there a difference between area control and area majority?

When shopping for board games, you might stumble across the term “area majority.” While this mechanic is slightly different than area control, they are essentially two sides of the same coin. Because of this, games that use area control and area majority get grouped into a single genre.

In an area control game, only one player can control a resource at a time. If a player successfully takes a resource controlled by another person, the previous owner loses all claim to it.

In area majority games, multiple players may claim a single resource at once. Often, this shared control comes with scaled benefits. For example, the player with the most troops in a given territory may gain four points at the end of a round while the player with the second-most earns just three points.

Can area control board games be used as an educational tool?

Yes! By nature, area control game mechanics teach valuable strategic thinking skills. Playing this type of game with children of any age can help develop their ability to think strategically about real-world scenarios they will encounter throughout life. What other skills do area control games help develop?

One of the most valuable skills area control board games can teach children (and adults!) is how to make calculated sacrifices.

In life, we often encounter situations where we need to give something up to gain something better. This situation is perfectly mirrored by area control game mechanics, which often require players to sacrifice a small portion of their resources/territory for a chance to get ahead.

While many board games encourage indirect conflict as players race around a board or collect points, area control games pit players directly against each other. This creates a low-risk environment for children to experience one-on-one conflict and learn to navigate any negative emotions that arise.

Can my child play a game recommended for an older age range?

The age range found on most board game packaging is just a suggestion from the manufacturer. For example, nothing is stopping a ten-year-old from playing a game recommended for ages 12 and up. However, these guidelines exist for a few important reasons.

First, a game’s age range has a lot to do with its complexity. Complex games often include written content or gameplay mechanics that are difficult for younger children to grasp. Of course, not all children develop these skills at the same rate. If you believe your child can play a game without confusion or frustration, it’s okay to ignore the suggested age range.

Second, some board games may contain content deemed inappropriate for young children. Again, whether or not your child plays a game with more mature content is up to you.