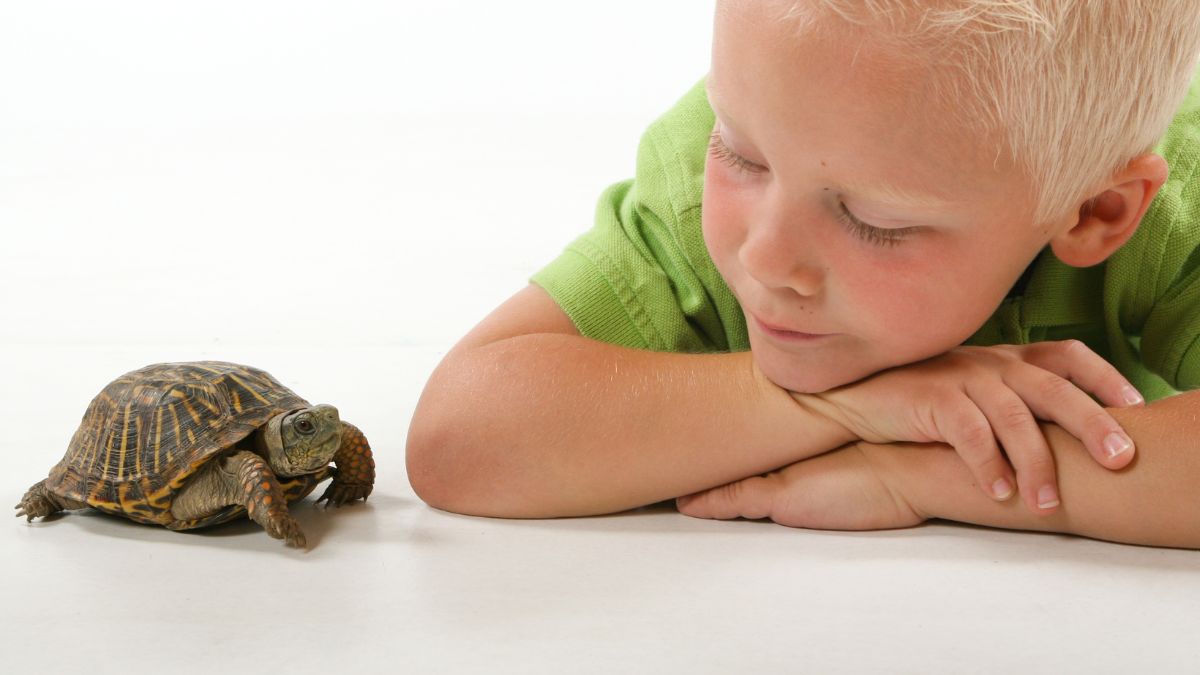 Who would have thought that a quiet, humble little creature dawdling and paddling around could participate in a marvelous science fair project?

Better yet, there are turtle science fair projects that don’t even require you to have a turtle, as you’ll see below.

But what makes these reptiles so fascinating (and ideal for scientific research)?

The thing is, we still haven’t exactly figured out a lot of their behavior and instinct. Scientists are still studying them, and we still don’t know how freshly-hatched, beach baby turtles instinctively navigate themselves into the water.

Besides that, we can learn a lot from them about magneto-reception, biological classification, orientation and navigation, and feeding schedules of animals.

Turtle navigation is one of the most perplexing problems in Herpetology. But it’s also a mysterious topic that’s still being researched by quantum biologists all around the globe.

Before you start thinking: yes, quantum biology is a thing! It lies at the intersection of quantum mechanics and theoretical chemistry.

Quantum biology tries to explain natural occurrences that defy the natural laws of physics. Surprisingly or not,turtle navigation is one of the most researched topics in this field.

Turtles travel by following the magnetic fields of the Earth. They have a magnetoreceptor sense, which can lead them to the same beach they hatched!

In the past 50 years, scientists have speculated many things:

We, as humans, do not have this ability (yet). So the best way to understand turtle navigation is to try and replicate it with a few magnets and a compass.

For this experiment, your kid will need an adult helper!

What they WON’T need is an actual turtle.

The magnetic field of the magnets interferes with the compass by pulling the needle towards themselves. When a compass needle is surrounded by strong magnets it can’t show the true north. So it spins and goes crazy!

The compass in this case represents the turtle. There have been many experiments with hatchlings and their navigation. But they would be unsafe to do at home or in a school lab. The magnets disoriented the hatchlings and made them swim in a different direction than usual.

This experiment can be modified in many ways:

In conclusion, this short experimental game gives you a taste of magnetoreception and allows you to navigate the way turtles do!

Whether in the wilderness or captivity, turtles are diurnal animals, and they do not function like other reptiles.

In the oceans, a lot of nocturnal animals are predators. And turtles do not have any defense mechanisms to protect themselves from them.

Turtles have amazing eyesight during the day, hunting see through jellyfish without any difficulties. But when it comes to night vision, it isn’t developed at all!

In order to protect themselves, they evolved into 100% diurnal creatures which allowed them to live that long.

When it comes to feeding, they will eat anything that looks easy to catch: jellyfish, shrimps, small fish, and sometimes plants.

They feed during the day when the sun illuminates the water.

Turtles in captivity aren’t surrounded by dangerous predators, so they can change their feeding time if they feel safe.

With this in mind, you can balance their food intake and make them feel safer in their aquarium.

You can alter their food, and see how they react to different vegetables, fruits and herbs.

By knowing your turtle’s behavior, and feeding schedule, you can provide them with enough food at the right time to make them feel safer. Who knows,  they might even want to experience the fun nightlife!

From navigation to feeding, turtles are an enigma.

There are a lot of things about turtles that are still unknown to us, what we know proves that they are 250 million years older than dinosaurs and slowly they’re going extinct one by one.

The fact that 6 out of 7  species of sea turtles are endangered, and some of the reasons include global warming, pollution, and the exotic animal trade, tells us everything we need to know about turtles.

If we want to learn more from them, the most important thing to do right now is to make a difference, and there are many ways we can save them.

Any of these could inspire you to come up with your own turtle science fair projects!

What do I need to know before buying a pet turtle?

Turtles have a lifespan of 15-25 years. So if you want a partner in crime for a longer period, you should consider purchasing a turtle!

They are the Michael Phelps of pets, so they need a semi-aquatic aquarium. They need to be in a bigger aquarium with at least 50-60 gallons of volume, with a water-to-land ratio of 75% to 25%.

They need an acclimated tank with heat bulbs and special thermometers for water and air. Keeping their surroundings at optimal temperature is crucial for their survival.

They can carry various diseases dangerous to humans, and they are sensitive to the bacteria we carry on our skin. So wash your hands before and after handling them!

Do turtles have an exoskeleton?

The short answer is no!

Turtles do not have an exoskeleton. They are vertebrates and their shell – carapace is made out of their vertebrae and ribs. It also has a sturdy layer of the epidermis that forms an interesting mosaic.

Fun fact: every turtle has a unique carapace (shell), and it’s considered to be the fingerprint of turtles.

What’s the difference between turtles and tortoises?

Both turtles and tortoises are part of one order – Testudines, but they aren’t the same.

Turtles are half-aquatic animals. Their body is hydrodynamic and they can endure more water pressure, with flippers specially adapted for swimming. So, they can’t spend a lot of time on land.

On the other hand, tortoises are terrestrial animals with rounder shells and fully functional legs adapted for walking on all kinds of surfaces. Tortoises can hide their head and legs in their shells, but turtles do not have this ability!

They eat different kinds of foods too. Turtles enjoy small fish, jellyfish, and lots of algae, while tortoises prefer munching on flowers, fruits, and vegetables.

In other words, trust not your eyes, but the official scientific classifications!

Ana Marija is a young STEM aficionado with a passion for writing. She is a non-formal educator in natural and social sciences, and currently studying theoretical physics at University. Fascinated by music and art, she takes an avant-guarde approach in combining modern-day activities with science.