The Sphero BOLT is the latest iteration of the Sphero ball-shaped robots. Since the release in 2018, the company has gone on to release both SpecDrums, and Sphero RVR. But the Sphero BOLT remains one of the most popular products for both educational providers and children alike. I’ve been putting this robot through its paces, from freshwater swimming to programming complex interactive games, so let’s take a closer look at what the Sphero BOLT can offer. 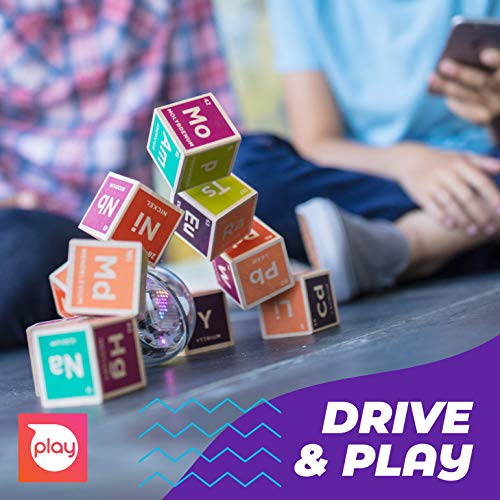 What’s in the Box?

Sphero BOLT is easy to unpack and the packaging has a really nice high-end finish with a lot of neon and bright colors to grab the interest of any child (young or old!). Inside the box you’ll find:

Around the size of a baseball, the Sphero BOLT is very similar to the earlier SPRK+ model. The only visual differences include the color of the band around the center of the shell, which is grey/silver in the case of Sphero BOLT, and of course the LED matrix.

BOLT also weighs more than any of the earlier robotic balls, at 200g. This is in part because of a larger battery, but also due to the added programmable LED matrix.

Like the Sphero SPRK+ and the Sphero Mini,  the Sphero BOLT has an array of sensors including an accelerometer, a gyroscope, and motor encoders. This can help to track speed, collisions, and direction, and enables you to create programs for different events, using simple if/else programming. Being able to respond to external events is one of the key features for any robot, and it’s these sensors that allow this to happen.

New for the Sphero BOLT is the 8×8 programmable LED matrix. This matrix can be used to deliver messages, animations, images or text, and really stretches the boundaries of what you can do with a ball-shaped robot, including programming games. In fact, I put this to the test and created a D&D style turn-based adventure game, not so long ago.

Building on from earlier models, the Sphero BOLT also offers light sensors, a magnetometer (compass sensor) and IR sensors. The light sensors enable light following and light avoiding programs to be created, as well as programming Sphero BOLT to adapt to sudden changes in the environment. The magnetometer or compass sensor allows Sphero BOLT to determine compass directions and headings, without having to aim the robot. But the most exciting new feature is definitely the latter: IR sensors. These allow up to five BOLT’s to be programmed to communicate with each other at any one time, perfect for bringing SWARM robotics to life.

Sphero BOLT is also packing a larger battery than earlier models. This is designed to withstand all-day use at school, as well as longer programming projects at home. As a result, the Sphero BOLT can hold a charge for around 2 hours while in drive mode, and up to 5 hours while not being driven the entire time. This is an excellent improvement on earlier models, which only provided around an hour of playtime. However, because of the increase in battery size, it takes around 6 hours to fully charge the BOLT, which is around double the charge time for any other Sphero model.

The inbuilt compass sensor or magnetometer that Sphero BOLT is equipped with isn’t just useful for programming reasons though. Actually, this sensor is also used to automatically aim the robot, to ensure that it drives in the right direction. All earlier models of the Sphero robot need to be aimed manually. This feature can help save time in the classroom, and help improve the overall Sphero BOLT experience.

Sphero BOLT connects to a wide range of mobile devices, and desktops,, via Bluetooth LE at a range of around 30m.

The Sphero Play App allows you to drive and direct BOLT just like any remote control vehicle. But with a range of driving styles, including a slingshot and face drive mode, BOLT offers an extended way to play that is sure to keep you occupied for hours.

There is also a simple coding option included as part of the drive mods section of this app, called Blocks. This allows you to choose small, simple, visual blocks to control movement, direction, and light color, to create simple sequences for the robot. This is a great way to introduce coding and programming to young children, without being too overwhelming.

In addition, this app offers three different games, including Exile II, Lightspeed Drifter, and Round Trip. To play these, you will need to use Sphero BOLT as a joystick to control the movement on the screen. These can offer hours of fun for children and adults alike.

The Sphero Edu app offers a safe and constructive environment for learning to code. There are three different coding options available:

But the Sphero Edu App doesn’t just leave you to struggle through programming alone. You can carry out activities, written by Sphero, to learn how to program using the three different methods, and even track your progress. There is also a large selection of programs written by public members of the Sphero community, that you can try out and edit yourself too. And once you’ve completed your first program, you can even share it for others to use as well.

So, what’s my verdict? Well, I think Sphero BOLT is one of the best app-based robotic toys on the market. It’s really easy to get stuck into the programming with Sphero Edu, at all levels, and offers a safe environment for children and young people to share their creations and programming progress, and experiment with new ideas. At the same time, the additional sensors and features offered by the Sphero BOLT extend the programming opportunities and increase the “playability” of the product. 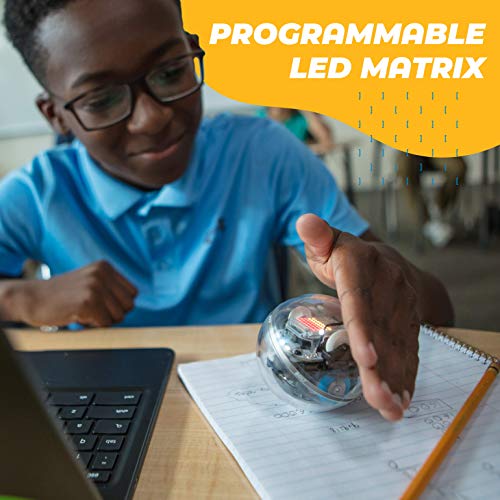 What can the Sphero BOLT do?

The Sphero BOLT can do so many things, it is hard to know where to begin! Firstly, it is a spherical-shaped robot that can move in any direction. It has sensors that allow tracking of speed, acceleration and direction. It also has a programmable 8×8 color LED matrix that can be used for anything from displaying a directional arrow to full-color animations. And all these things (and more!) can be achieved via Bluetooth connection to a device with the necessary app.

Is the Sphero BOLT waterproof?

The Sphero BOLT is waterproof to a depth of 5 m (15 ft), although he actually floats on top of water. However, submerging your BOLT can interfere with the Bluetooth connection.

What age is Sphero BOLT for?

Sphero BOLT is recommended from 8 years of age. Of course, younger kids can still have a blast with the BOLT under careful adult supervision and guidance. Some children may be better suited to the BOLT from 9 or 10, depending on their fine-motor skill and reading ability.

Does Sphero BOLT have a camera?

The BOLT does not have a photographic camera that allows taking pictures, however it does have light and infrared sensors to help it navigate in the world.

Fully charged, the BOLT’s battery should last up to 2 hours of constant use. This is a big improvement on other Sphero models, which only last around 1 hour.

Can you control Sphero BOLT with a computer?