Root has taken the board gaming world by storm, earning 4 Golden Geeks and an International Gamers Award for its unique, engaging design. It has distinguished itself by taking the concept of asymmetrical balance to a new level, granting each of the game’s four basic factions their own distinct goals, rules, and mechanics. But, this feature also steepens the game’s learning curve.

The key for a successful Root Board Game strategy is to have an understanding of each faction, your enemies, as well as your own. 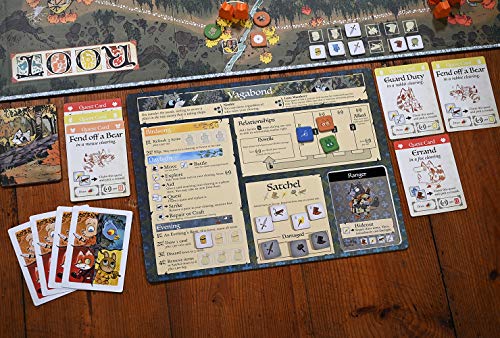 For my first game, I was immediately drawn to the cats. Adorable and vicious. How could cats lose to a bunch of birds and rodents?

I got the last place.

While starting with the most territory seems like a great advantage, you’ll find that it paints a target on your back. Both the Eyrie Dynasties and the Woodland Alliance are unlikely to negotiate with you unless you’re nearing the end of a game, and you need to work with one of them to keep the other in check.

After getting some more experience, I found some points to focus on when playing with or against the feline empire:

The Eyrie manages to strike a balance between finesse and raw power by recruiting, moving, battling, and building through their Decree. Depending on how the player builds and follows their Decree, this faction can either soar ahead with incredible momentum or come crashing to a halt.

Careful consideration is needed to control this dynamic character: The woodland critters unite, subtly gaining supporters in the shadows until they’re ready to revolt. While the Alliance might seem like a minor nuisance (or an unassuming ally) to the other players at first, they can gain a commanding late-game presence if left unchecked.

Their greatest asset is being able to profit off of the aggression of others. The Alliance always gets the higher dice roll on defense, and they gain more supporters when enemy warriors attack or move through sympathetic clearings.

Pay attention to these factors to wield the Alliance’s subversive power before your rebellion is squashed:

Rounding out the four basic factions is the Vagabond, a character who can play all sides without raising an army. By exploring, completing quests, and choosing to either aid or strike the other factions, the Vagabond provides a unique experience that allows for varied styles of gameplay.

Crucial decisions you make both in-game and during setup will influence how you make your particular style succeed:

Always remember that the primary goal with a conventional victory is to earn 30 victory points. You don’t need to dominate the board or wipe out the opposing players; having healthy competition often plays in your favor. Anybody can gain an unexpected burst of victory points or activate a Dominance card, so don’t focus all your attention and effort on the perceived front runner.

The most valuable information to know is the personalities and tendencies of the friends you play with. Who will wield their power aggressively? Who will be more reserved and defensive? Do they make decisions on impulse, or do they hatch strategies that come to fruition turns later? Your story of woodland conflict will be shaped by the characters you choose to share it with!

I hope that this article helps you master the core game before you move on to the expansions! 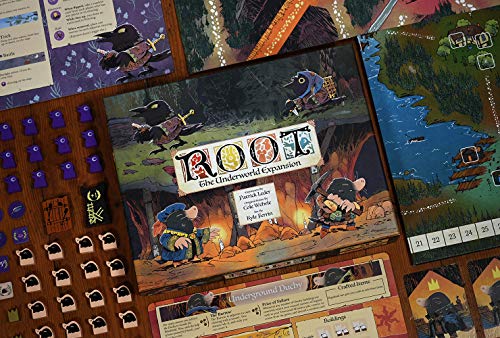 Root: The Underworld Expansion
An expansion for Root that adds two more factions - the Moles and the Crows.
Check Latest Price

Which faction is the easiest to learn for a starting player?

The order that the factions are presented in this article goes from easiest to hardest. The Marquise and Eyrie work through the build-recruit-move-attack mechanics typically found in strategy war games. Putting a twist on this standard, the Woodland Alliance requires the player to work as a tactical, scheming underdog. The Vagabond offers the most customization while demanding the most attention to detail.

How do the expansions improve the game?