There’s no doubt that LEGO makes some of the best STEM toys. And what toy says “STEM” more than a programmable robot? So, it’s not surprising that LEGO has not one but two popular, flagship programmable robotics sets – LEGO Boost Creative Toolbox and LEGO Mindstorms. With these options comes potential confusion – what, exactly, is the difference between these robotics sets from LEGO?

If you search for Mindstorms right now, you won’t be able to find the widely admired EV3 version. June 2020 has seen an entirely new release — the so-called 51515 Robot Inventor Kit. We’ll cover the differences between the two editions in some more depth below, so keep reading!

What are the Differences Between LEGO Boost & Mindstorms?

The most important thing you need to know about Mindstorms vs. Boost is that LEGO targets different age brackets with each set.

The LEGO Boost Creative Toolbox is designed for younger builders, typically 7 to 10 years old, although the set would be of interest through to 12 years and even beyond. In contrast, the LEGO Mindstorms Robot Inventor Kit aims at tweens to teenagers, 10 to 15 years old. It’s worth noting that there are also plenty of adults who enjoy using Mindstorms!

The difference between the two isn’t formally specified. However, when you look at all prior Mindstorms iterations and the latest 51515 robotics kit, they are much more complex than Boost.

So, if you are looking for a robotics kit with an appeal for the whole family, the 51515 Robot Inventor is undoubtedly a better option. 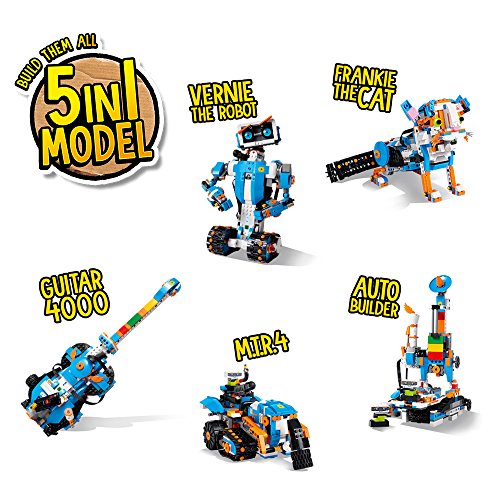 Next up, the number of designs included with each set differs. Inside the box, LEGO Boost has five robot models to build, including Vernie the Robot, a Guitar, Frankie the Cat, Autobuilder, and M.T.R.4 (Multi-Tooled Rover 4).

Mindstorms 51515 also has five robot designs included in the box: Blast, Charlie, M.V.P., Gelo, and Tricky. Despite its name, Tricky should probably be your first project, as it’s the easiest to build. Note, however, that there isn’t an official recommendation as to which project to tackle first.

However, you can use the modules to build dozens of extensions and customize your robots. Over 50 activities are built into the app, which will be very handy for newbies. It’s almost like having 50 different robots!

Even better, once you improve your coding skills, you can program these cute little bots to do whatever your heart desires. For example, you can transform your M.V.P. (Modular Vehicle Platform) into a crane or a turret. Charlie is a cute little bot who will play drums and dance, among other tricks. Tricky will throw the red ball through a modular basketball hoop. But it can also use a pen to write!

My personal favorite, however, is Gelo – a quadruped that actually walks on its four legs. No wheels to move! I am no engineering expert, but I bet designing those legs has got to be a work of a genius! If someone from LEGO is reading this article, please let the next iteration include a tarantula!

The 51515 is still young, so savvier fans haven’t got a chance to expand on its possibilities even further. Knowing LEGO’s customer base, it’s bound to start happening sooner rather than later!

LEGO took their time to release a new Mindstorms iteration. But once you get your hands on it, you’ll realize it took time with a reason!

LEGO Boost mainly uses regular bricks and hence is familiar to kids who have grown up playing with any number of LEGO sets.

On the other hand, LEGO Mindstorms is based on a more advanced building system, with some parts that younger hands may have trouble manipulating. Indeed, while both sets can be extended with regular LEGO bricks, you can combine the Boost Creative Toolbox with some other specific LEGO kits to build new controllable creations!

LEGO Mindstorms has a powerful processor. Admittedly, it’s as potent as the EV3’s Intelligent Brick was. In other words, it will do a marvelous job. If anything, it can do a whole lot of processing onboard, allowing a wide variety of autonomous functionality to be programmed into it. If you’re skillful enough with coding, you can undoubtedly automate your bots fully.

Boost has a much less sophisticated control unit. Instead of having its own processor, it relies on a paired mobile device (e.g., an iPad) to undertake the processing. 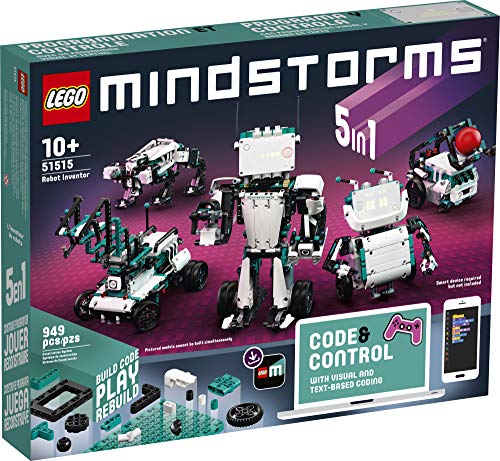 The Boost app uses fun and straightforward icon-based coding environment on the paired mobile device. It’s easy to figure out right out of the box, but it doesn’t offer nearly as much room for growth.

The programming environment is much richer and versatile in Mindstorms 51515 Robot Inventor. Beginners can resort to Scratch, a visual programming language that is very intuitive and self-explanatory. There are over 50 different activities that are pre-built into the app. It translates into weeks of pure fun.

But that’s just the beginning. Once your kid gets fed up with these activities, they can proceed with more advanced stuff. Digging into Python, one of the most widely used and versatile programming languages will open up an entirely new world of endless possibilities. Python is a text-based language that serves as a basis for data science and artificial intelligence. You just want your kid to get acquainted with it. And such a fun way to do it too!

You can control both LEGO Robotics sets with a mobile app via Bluetooth.

However, the 51515 Robot Inventor Set seems to have downgraded its connectivity compared to the previous model. Its predecessor, the wildly successful EV3, had many more connectivity options. It included an infrared remote control, which enabled direct control of the robot without a Bluetooth connection. In contrast, 51515 only has Bluetooth remote connectivity.

The hub also has fewer output ports. Most of it consists of a rechargeable lithium-ion battery, which you can charge through a USB port. On the other hand, there is still a light sensor, a gyro sensor, a color sensor, four servo motors, and a distance sensor. There’s no touch sensor anymore, though! 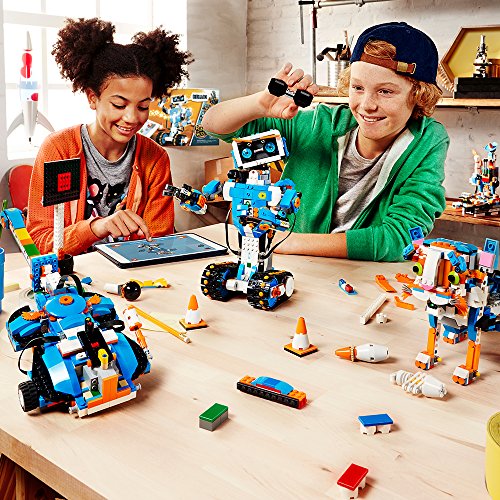 If you’re trying to decide between buying the Boost vs. Mindstorms Robot Inventor, the main deciding factors are complexity and sophistication.

For younger kids, typically between seven and nine years of age, we would typically recommend Boost. It is a more standard set, with LEGO bricks that are mostly standard. Programming it with the Boost app on a tablet device is a fun, colorful, and guided experience. The Boost robot models are also designed to appeal to a younger audience.

For kids around ten years old, the decision could go either way. It depends on their previous experience and level of interest in more sophisticated STEM toys and sets.

From 11 years of age, and for kids who have shown some level of enthusiasm for STEM, the Mindstorms 51515 can open up endless possibilities. It has onboard processing power, and the set is based on the Technic system. Hence you can construct much more sophisticated and ‘intelligent’ robots.

But engineering is just half of all the fun. You can program these robots using either visual Scratch or line-based Python, and those coding skills are directly relevant to real-world applications in almost any industry!

For these reasons, Mindstorms is not just a kids toy but an entry into the exciting world of robotics as a hobby. That is a big reason why Mindstorms features in our list of Best STEM Toys for the Year. With LEGO Mindstorms 51515, your child might get involved in a robotics club, competitions, and who knows from there?!

With younger kids, screen time is always an important consideration. Note that Boost only requires the Boost App while coding the robots. For the assembling process, you can download printable PDF instructions from the LEGO Education site. However, the Robot Inventor kit doesn’t have such an option. You’ll need to use the app for building instructions too.

Also, Boost includes a playmat that you can use for various activities. Strangely enough, this playmat’s missing from the 51515. As a simple piece of cardboard, it’s far from being a deal-breaker. But it would have been nice to have it for those of you who aren’t collectors of LEGOs!

Is LEGO Boost compatible with Mindstorms?

Both Boost and Mindstorms 51515 are compatible with regular LEGO bricks, so you can extend your creations with all the LEGO pieces you have accumulated from other sets! However, the ‘robotics’ components of Boost, the Move Hub, motor, and sensors are not compatible with 51515 or related add-ons.

What age is LEGO Boost for?

The Boost Creative Toolbox is geared towards children aged 7-12 years. However, this is just a generally recommended age range. Like most LEGO sets, this one will also be suitable for older kids and adults alike!

How difficult is programming a LEGO robot?

It can be as easy or as difficult as you need it to be. That’s the beauty of LEGO, and one of the top reasons why the experience is so rewarding!

You can start simple, with the pre-programmed functions and activities, and work your way up. Every player, be they a child or an adult, can determine a playing and learning pace that suits them best.

Which is the best LEGO coding robot toy set for schools and homes?

There is no definitive answer to this question. It really depends on the kids’ age, level of expertise in robotics, and personal interests.

Boost is still the name of the game for absolute beginners. It’s also significantly cheaper, which makes it much more appropriate for dipping your toes into robotics.

However, if you already have significant experience with robotic kits, Mindstorms is probably the way to go. The previous EV3 iteration is still probably the most popular. It is now superseded, unfortunately. But if you can find it, go with it by all means!

Are you courageous enough to be among 51515 pioneers? Hardcore LEGO fans are still playing a little bit disappointed. But we think that this set will shine as the best LEGO creation yet!