If you’re interested in playing a tabletop roleplay game, Dungeons & Dragons is considered the most widely-known and accessible game. However, getting into D&D can be time-consuming, and some people have strict schedules. Let’s go over how long it takes to play Dungeons and Dragons, from building a character to finishing your first adventure.

Dungeons and Dragons is a unique game that can vary wildly in gameplay, complexity, and length time required to play. If you’re short on time but still want to play with a group, make sure to discuss your schedule with your Dungeon Master (DM) and opt for shorter sessions.

How long does it take to play Dungeons and Dragons?

Making a character for Dungeons and Dragons

Making a player character, or PC, is the first step to playing D&D, but it can also be the most time-consuming aspect of the game. Among other things, you’ll need to come up with a name, appearance, backstory, skillset, and stats for your character.

Your player character doesn’t have to be very complex, especially if you’re playing in a casual campaign. Some Dungeon Masters even prefer PCs with light baggage and open-ended backstories.

How you build your character is up to you. If you have the free time and inspiration to build a character from scratch, you can walk yourself through the process using online guides, or collaborate with a friend to speed up the process.

If you’re short on time and just want a playable character you can pick up and use, you can find character sheets online, or quick-build a character. You can find many quick-build guides online that will help you speed-run the character creation process. This depends entirely on your DM. Every group is different, and it’s important to find a D&D group that matches your playing style. If you’re looking for short, low-intensity sessions, you might not fit in with a group that focuses on long, intense meetups.

Typically, most groups settle for sessions lasting between 3-5 hours, though many old-school players will set aside entire days (or nights) for in-depth roleplay and combat. Likewise, there are groups that prefer shorter meetups lasting from 2 – 3 hours at most.

The length of your game sessions depends entirely on your group’s schedule, stamina, and the intensity of your campaign. If you’re worried about getting locked into a hobby that eats up too much of your time, you can join a casual group, discuss with your DM, or find opportunities to slip out early. How long does a Dungeons and Dragons campaign last?

Sessions refer to an individual meetup, while campaigns refer to your party’s adventure as a whole. While sessions might last anywhere from 2 – 10 hours, campaigns can last months or even years. This depends entirely on your DM.

Campaigns typically fall into one or two flavors, including:

Not every adventure will fall neatly into one of these categories, and not every campaign is the same. It all depends on the spirit of the group, the DM’s interest and commitment, and the schedules of those involved. If you’re not sure what kind of campaign you’re joining, make sure to talk to the DM and see what you’re getting into.

What if I don’t have time to play?

Some people have busy schedules, and that’s okay. However, it’s not fair to join a campaign as a core player if you’re just going to flake out. While missing sessions isn’t a big deal in some campaigns, you might miss a lot of stories if you’re a part of an intense group.

It’s vital that you talk to your DM and establish exactly when you’re free. Depending on the group, this might mean an entire day or a time slot in the afternoon/night. From there, you need to make a commitment and do your best to show up.

If your schedule is really packed or unpredictable, it might be best to consider other options. You might find more success playing in a large, casual group with enough players to stay afloat when you’re gone. For more involved campaigns, you can just chime in as a temporary party member from time to time.

Busy people don’t have to give up on playing D&D entirely. There are plenty of ways to get your fill without making a commitment or letting people down. Just talk to your DM and look for a campaign that suits your needs. 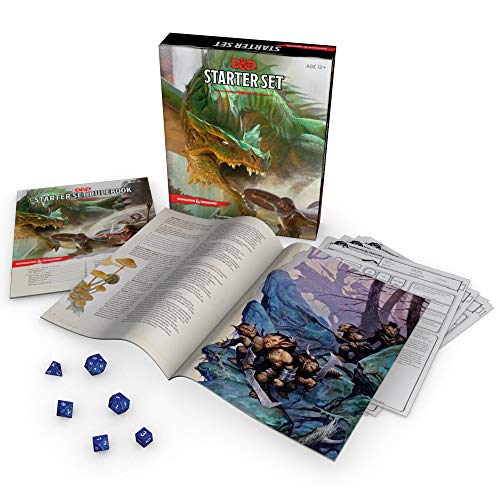 A D&D set that includes ready-to-play characters, six dice, an adventure book, a rule book, and a character sheet – perfect for beginners.

Does making a character take a long time?

That depends on you! If you’re invested in building a character from scratch, it might take longer than using a pre-built character or the quick-build suggestions. You can also save time by collaborating with a more experienced player/DM who understands the process.

Does it take a long time to learn the rules?

Yes, but you don’t have to memorize the handbook to play the game. If you’re a first-time player that doesn’t want to sink hours into reading the handbook, you can join a more casual or experienced group that will help you learn along the way. You can also keep your smartphone on-hand to search for questions as you play.

What if we go over the schedule?

Usually, sessions go over because the players get involved in roleplay, combat, or puzzle-solving. If you’re on a tight schedule and don’t want to get stuck playing overtime, you can always politely drop out and let your party wrap up without you. There’s no shame in sticking to your guns, especially if you told them beforehand that you had other obligations.

If your group sessions are consistently going over, talk to your DM about guiding the group to a more timely conclusion.