The appeal of tile games comes from the freedom and creativity they provide, giving players the resources to build a thriving landscape complete with cities, fields, roads, and various other features.

Carcassonne isn’t just a tile game. It’s also part of a class of games known as “Eurogame” or “German Style” which are defined not only by their playstyle but also from where they were developed.

Carcassonne is a real city near the French and Spanish border, and the creators of the game were inspired by the romantic design of this medieval fortress city. Players can get caught up in the details and often miss opportunities to strategize.

What are some easy but effective strategies to use in Carcassonne?

It’s not as easy as it sounds. Even the most experienced players will get carried away with their acquisitions and run out of meeple. Even doing this in anticipation of getting one back two or three turns later is risky, as the game can change dramatically with only a few tiles.

Although it seems like bigger cities are part of the players’ goal, smaller cities can be just as effective for scoring points during the game as well as when it concludes.

A quick four to six points every few turns, a steady but consistent addition to the score, can be more beneficial than building a bigger road or city. Opponents who build longer roads or bigger cities tie up their resources, hoping for greater returns later in the game that might not materialize.

This is everyone’s favorite feature, and the irony is that the Monastery tile is so easy to use that players take it for granted and ignore its true potential. Remember that the Monastery can benefit every other feature near it, and your control over this space can also be used against your opponents. Some players love the big city, and there are ways to utilize this feature as a less risky part of your strategy. Playing with expansions like Inns and Cathedrals and Traders and Builders, which allow extra points and tiles, make a big city less risky to build and even more profitable once finished.

Dominate the gaming space with a big city not only as a place to concentrate your city tiles but also as a way to limit the reach of your opponent’s farmers. It still only counts as one city for a farmer regardless of size.

Mages and witches can make or break a big city, and they’re only available as part of a mini-expansion of the same name. These two special meeples can adjust the final score of a city or road, with the Mage doubling the points and the Witch reducing them.

Roads can be just as easy to use as monasteries and are just as equally under-utilized. They can be used to score points in the game, along with helping players plan for scoring points at the end. Most of the expansions also include more road tiles that also include resources like gold and monasteries.

Builders are special meeple that is part of the Traders and Builders expansion. You can draw an extra tile if you add it to a structure where one is placed with your first tile. They’re often used in cities, but they’re just as effective on roads.

Farmers collect more points depending on how many cities are in a pasture that they control. Build roads to strategically cut opposing farmers out while enriching your own. 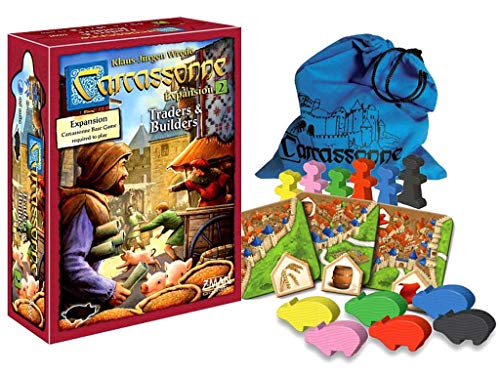 One of the best expansions for this fun tile-laying game, introducing the Builder meeple.

How long does it take to play Carcassonne?

This depends on how many expansions you have, if at all. The original game consists of 72 tiles, including the starting tile, so between two people, that doesn’t make for a very long game, but it’s still an interesting one. On the other hand, two players with several expansions can play for hours and rack up hundreds of points in a single game.

How many expansions are there for Carcassonne?

Although there are only a few mentioned in the strategies, there are currently more than 30 full expansions and mini-expansions, along with several spinoff games. It’s possible to buy these separately after picking up the base game, but there are also sets that include the original game and a selection of expansions.

What’s the best expansion for Carcassonne?

This depends entirely on personal preference and individual play style. Do you prefer longer games, games with higher scores, or shorter games? Some variations focus more on the medieval siege motif, while others include incentives like gold or trade goods for players to collect, adding to the choices.