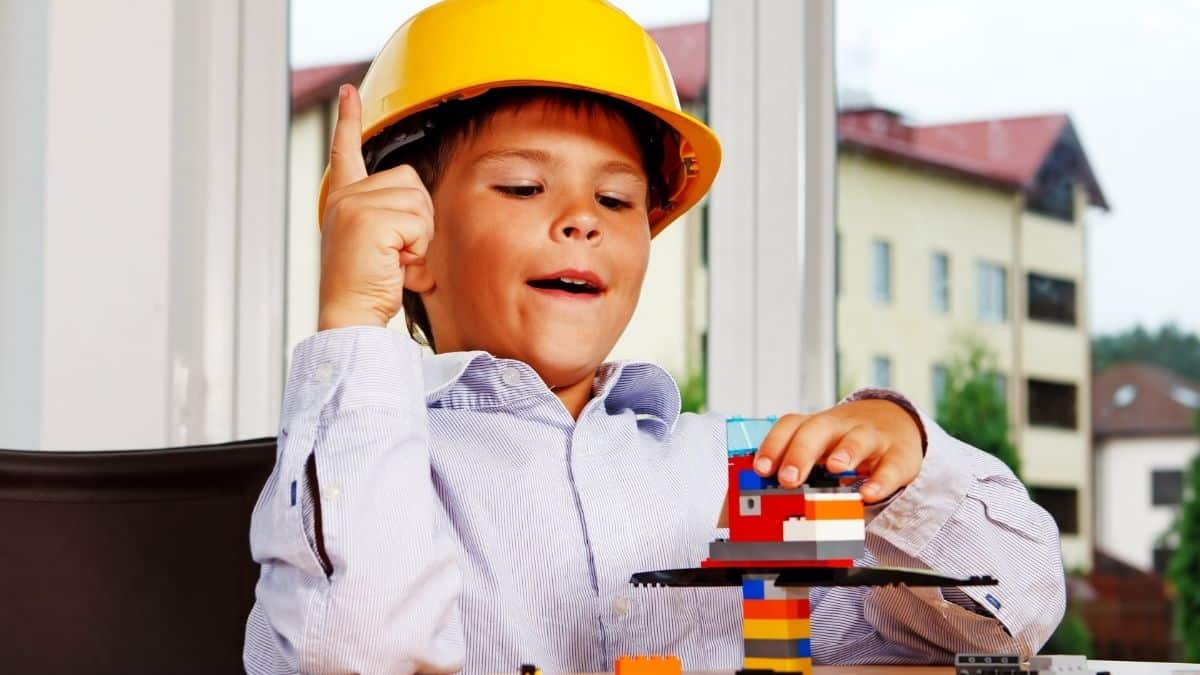 Life is hard when you need to choose from the best LEGO Technic sets!

Primarily because ALL of them are good. And your wallet does have a bottom.

So, how to make your choice without being sorry?

LEGO Technic sets are STEM toys made for children eight years and older. A step above your average LEGO toys, these sets promote engineering while remaining accessible and fun for children to do independently.

From realistic construction vehicles to fully-functioning crane systems, these sets are a gentle introduction to STEM. A key feature of Technic sets that makes them stand out from regular LEGO sets is the highly functional mechanical components.

Technic kits may have functioning winches, rotors, articulated joints, wheels and even gearboxes and differentials! Seeing these key engineering components in miniature is great preparation for their life-sized counterparts.

To make your life at least a little bit easier, we’re going to present some of our favorite LEGO Technic sets. These toys are made to work alongside your child’s interests. 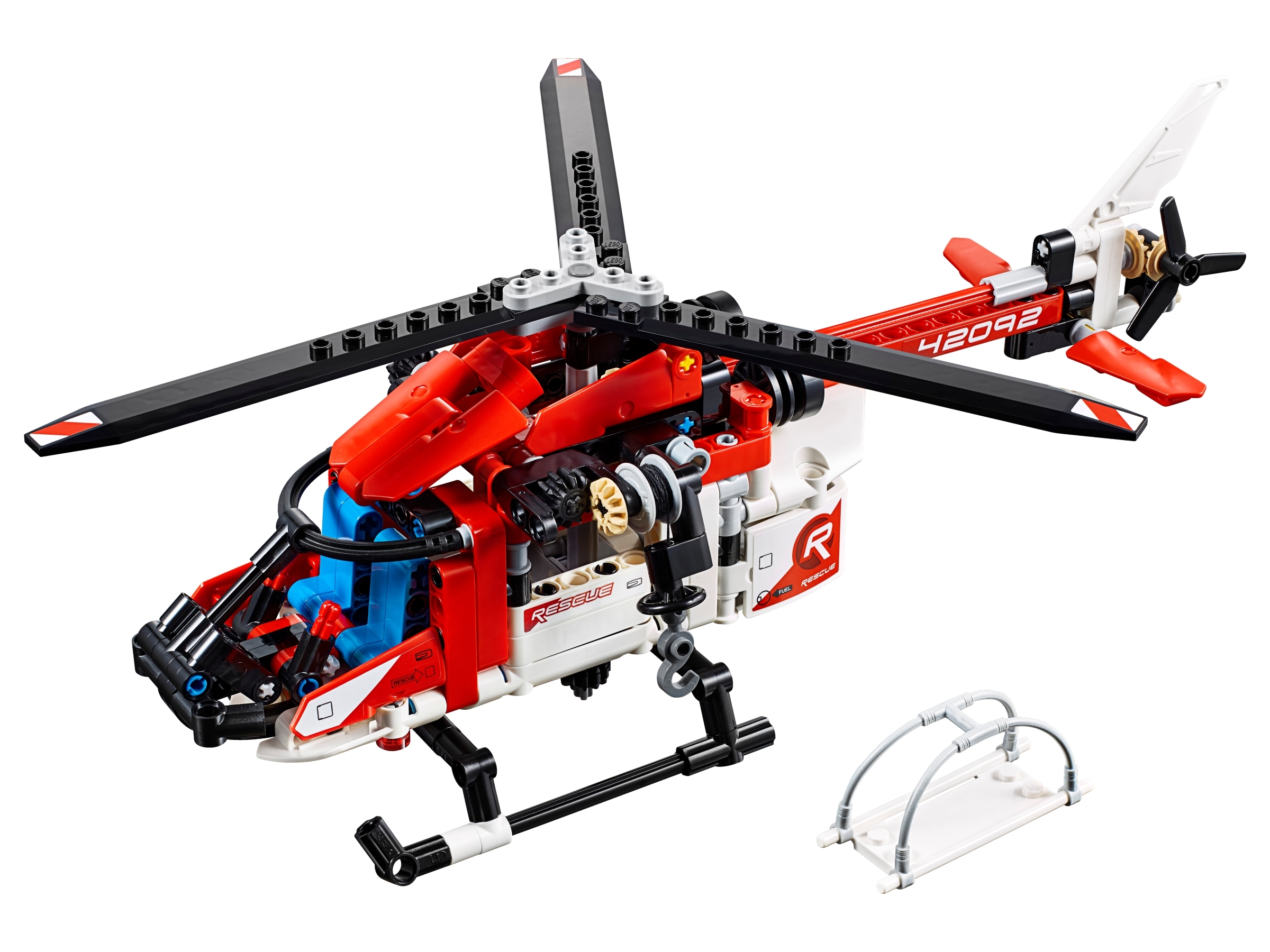 A set that you can rebuild into a futuristic plane, providing even more fun and hours of learning.

The LEGO Technic Rescue Helicopter is one of the easier sets to build, as well as one of the cheapest.

This realistic helicopter comes with opening and closing side and rear doors, a working winch, and a rescue stretcher. The winch lowers and raises the stretcher, and children can turn the blade by hand.

When you get fed up with the helicopter, you can rebuild this set into a futuristic plane, providing even more fun and hours of learning. Of course, you can use this helicopter with other LEGO Technic sets. After being built, this helicopter is entirely open-ended and promotes tinkering. 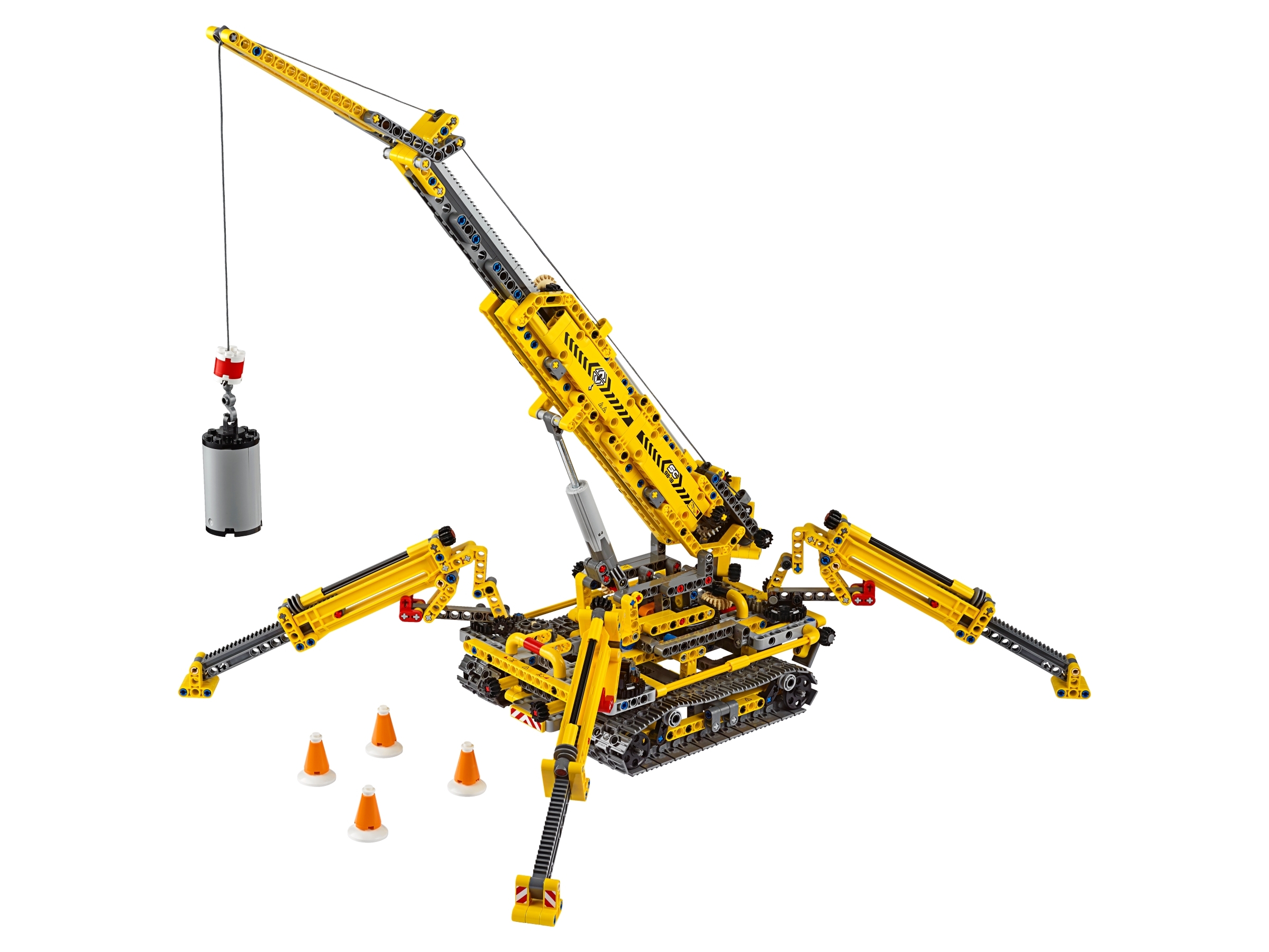 A tower crane that measures 20 inches high and 19 inches long when fully built; can rotate 180 degrees.

For children with a little bit more experience, this LEGO Technic Compact Crawler Crane is a great option. It measures 20 inches high and 19 inches long when fully built, making it extremely rewarding when children get done with it! The boom is extendable, and the hoist works – it even has cabling and a safety lock. The whole crane rotates 180-degrees.

When children are done creating the crawler crane, they can also create a compact tower crane, which features the same features packed into a smaller, slightly more difficult to build design. 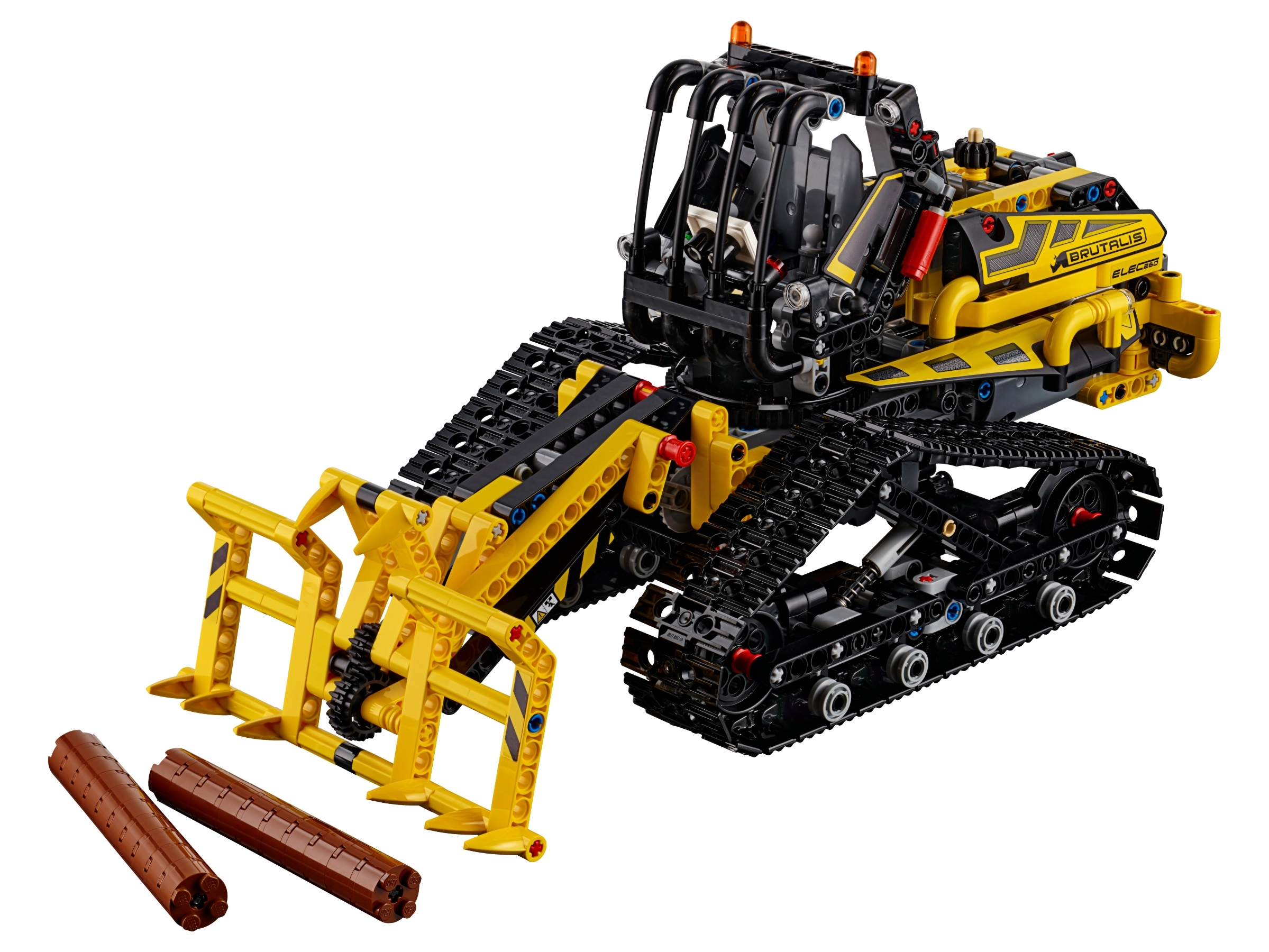 A kit that allows children to build a completely functional tracked loader which can be re-built into a tracked dumper.

Okay, we have to be honest for a second – this kit is probably OUR favorite.

The LEGO Technic Tracked Loader is a little more challenging to build than the others and cost a little bit more, but the open-ended play opportunities that become available after kids complete it are endless. It is probably going to see the most use out of all the building kits we mention in this article.

This kit allows children to build a completely functional tracked loader. The boom and claw work, there is a 2-speed winch, and the cab completely rotates. It is insanely realistic.

You can also rebuild it into a tracked dumper. Even if your child doesn’t particularly love construction equipment, they’ll probably get a kick out of building this realistic machine. 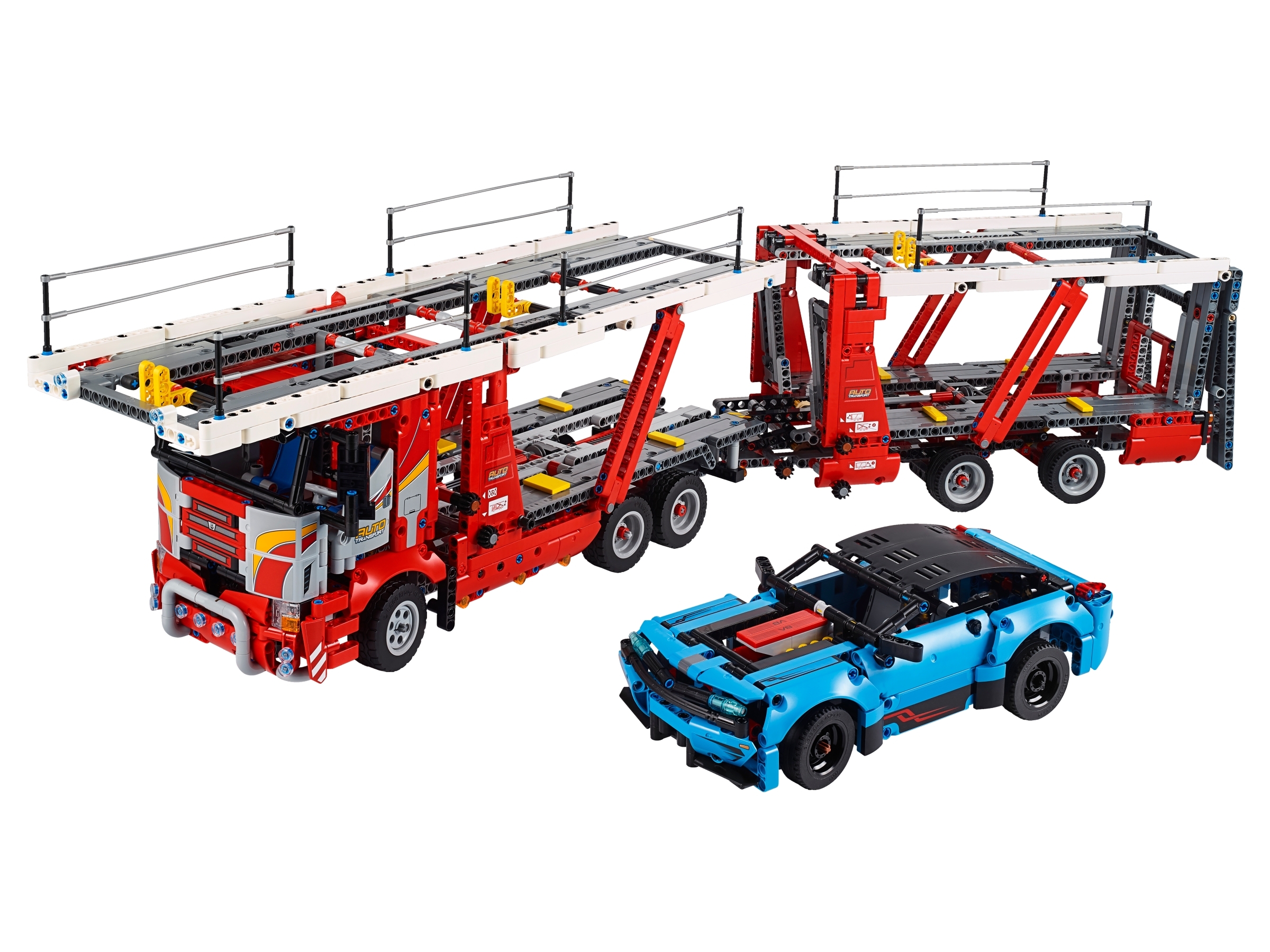 The LEGO Technic Car Transporter is another one that produces lots of open-ended opportunities. It has an adjustable deck, tilting driver’s cab, and working vehicle locks. The car is extremely detailed and includes a V8 piston engine design for children to put together and explore.

This toy truck and trailer building set can alternatively be built into a technic truck and multiple car models. It’s also compatible in scale with the LEGO Technic Chevrolet Corvette ZR1, so you can expand with that set and use the transporter to carry multiple cars! If your child loves cars, this is a great way to introduce them to STEM concepts. 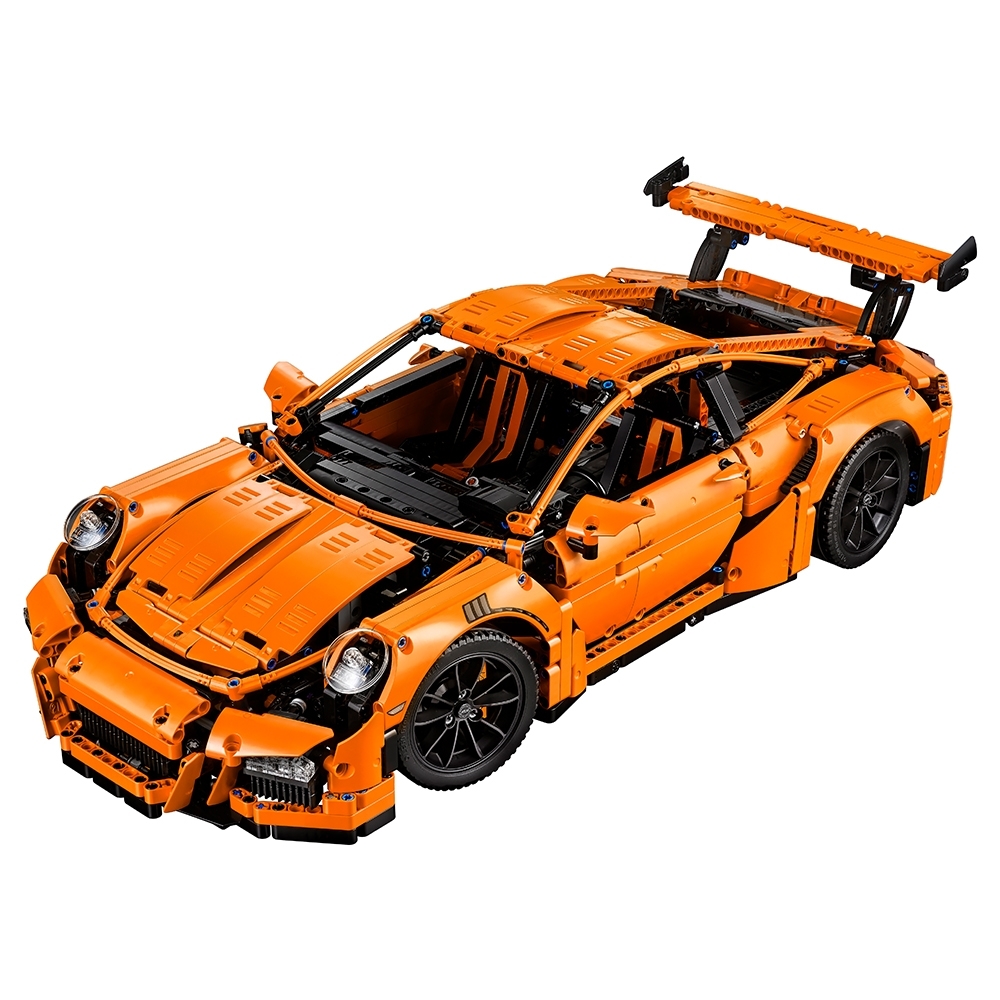 Recommended for older children who have developed attention spans.

This incredibly detailed Lego Porsche is best for older children who have developed attention spans. With over 2,700 pieces, this car takes quite a while to put together, but the results are very worth it!

As you can imagine, this is also one of the pricier sets.

However, the amount of detail on this car is unforgettable and makes the price tag very worth it. Even the driver’s seat is detailed and it comes with a full-color, collectible book that includes a comprehensive history of this unique car. Children can even put together the engine, which has moving pistons! 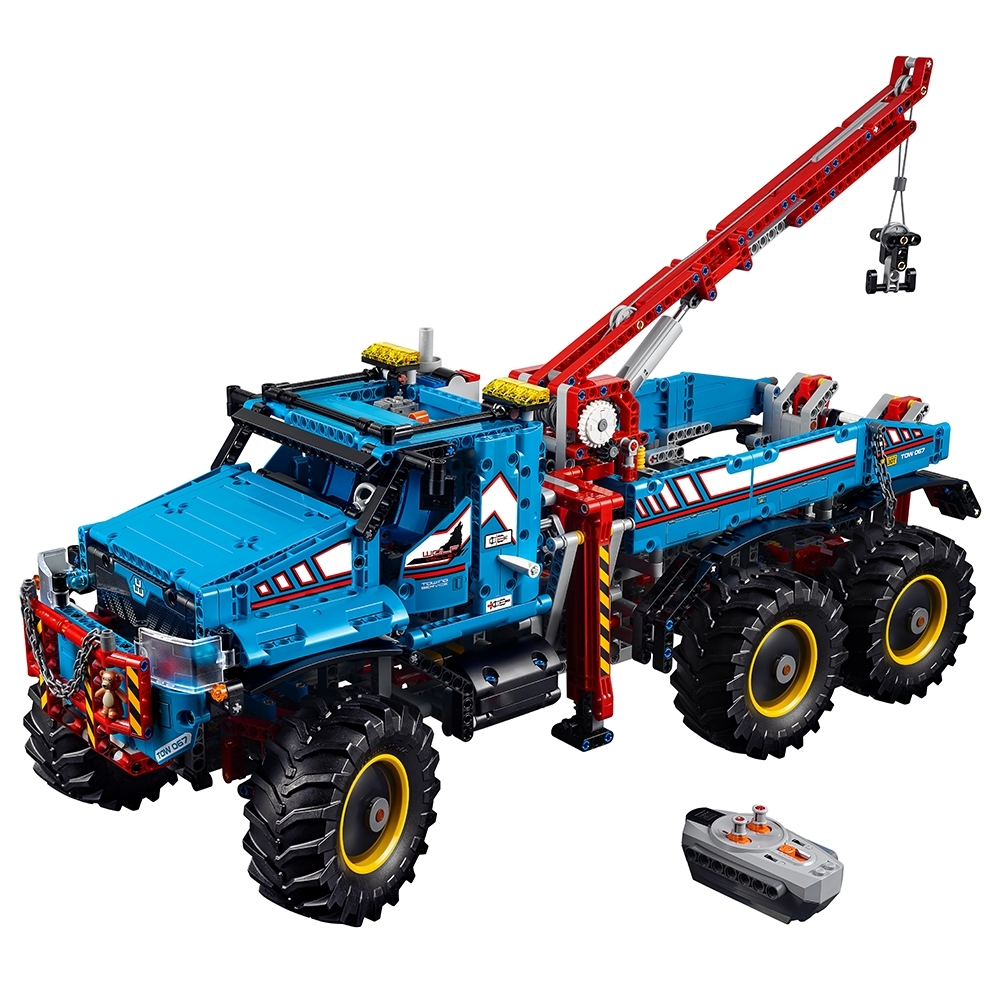 An actual, drivable vehicle that allows children to actually drive it around after they build it.

LEGO Technic 6×6 All Terrain Tow Truck features 2 LEGO Power Functions motors, a battery box, receiver and remote, allowing children to actually drive it around after they build it.

Because it is a vehicle that’s actually DRIVABLE, this is one of the more complicated sets for children to make. We recommend it for older children or those with quite a bit of Lego experience.

You can also rebuild this kit into a research explorer vehicle, which is even cooler than the tow truck. This kit is one of the best o 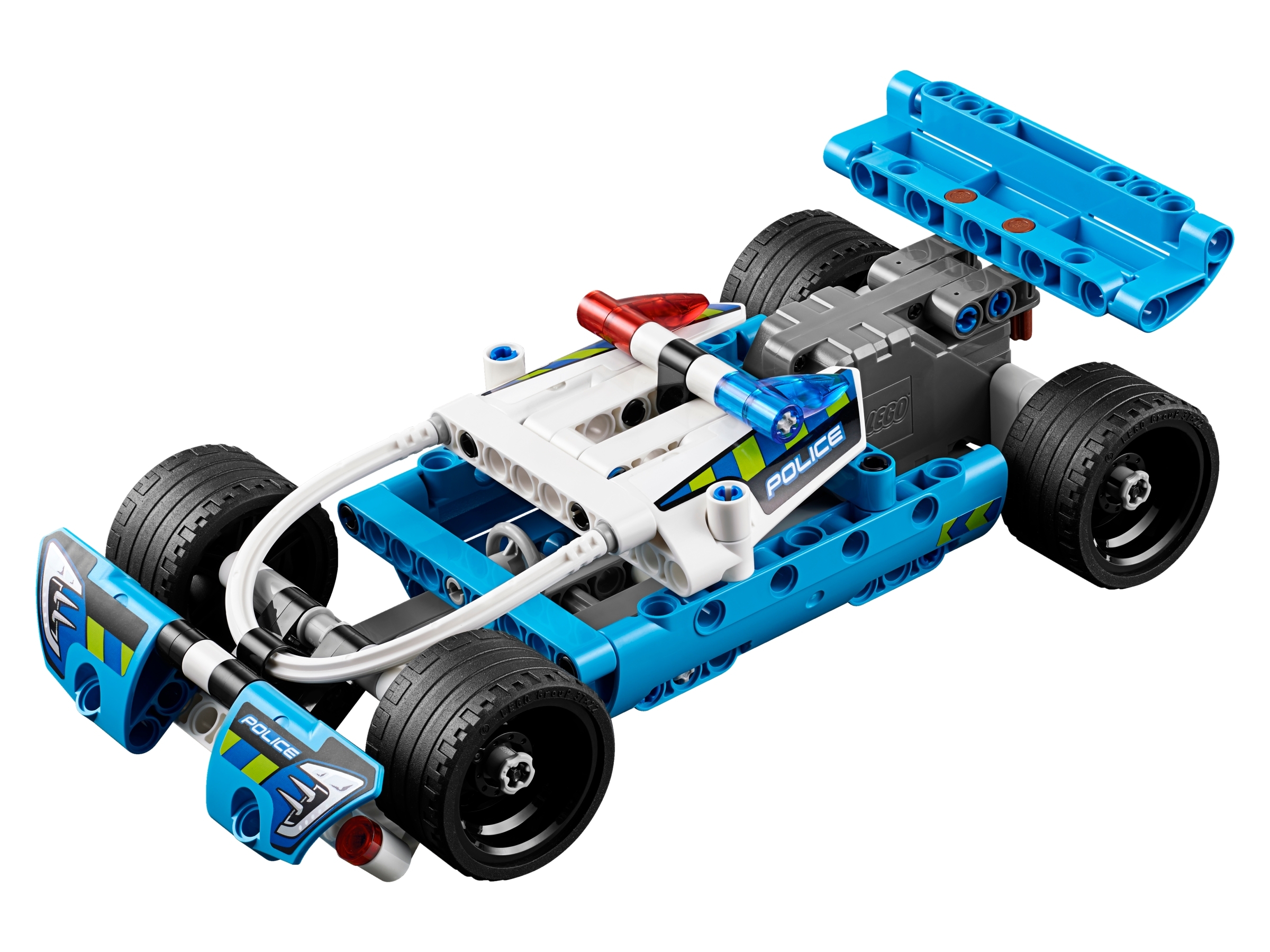 If you’re on the fence about whether or not to purchase your child a Lego Technic kit, you might as well get the LEGO Technic Police Pursuit Building Set. It’s simpler and therefore substantially less expensive than the others we’ve reviewed.

It’s easier to put together as well, making it the best option for those with absolutely no LEGO or STEM experience.

With that said, this vehicle does have a lot to teach children about STEM. It has a powerful pull-back motor, allowing children to pull the car back and then watch it speed off. These basic mechanics can go a long way to igniting a child’s passion for STEM. 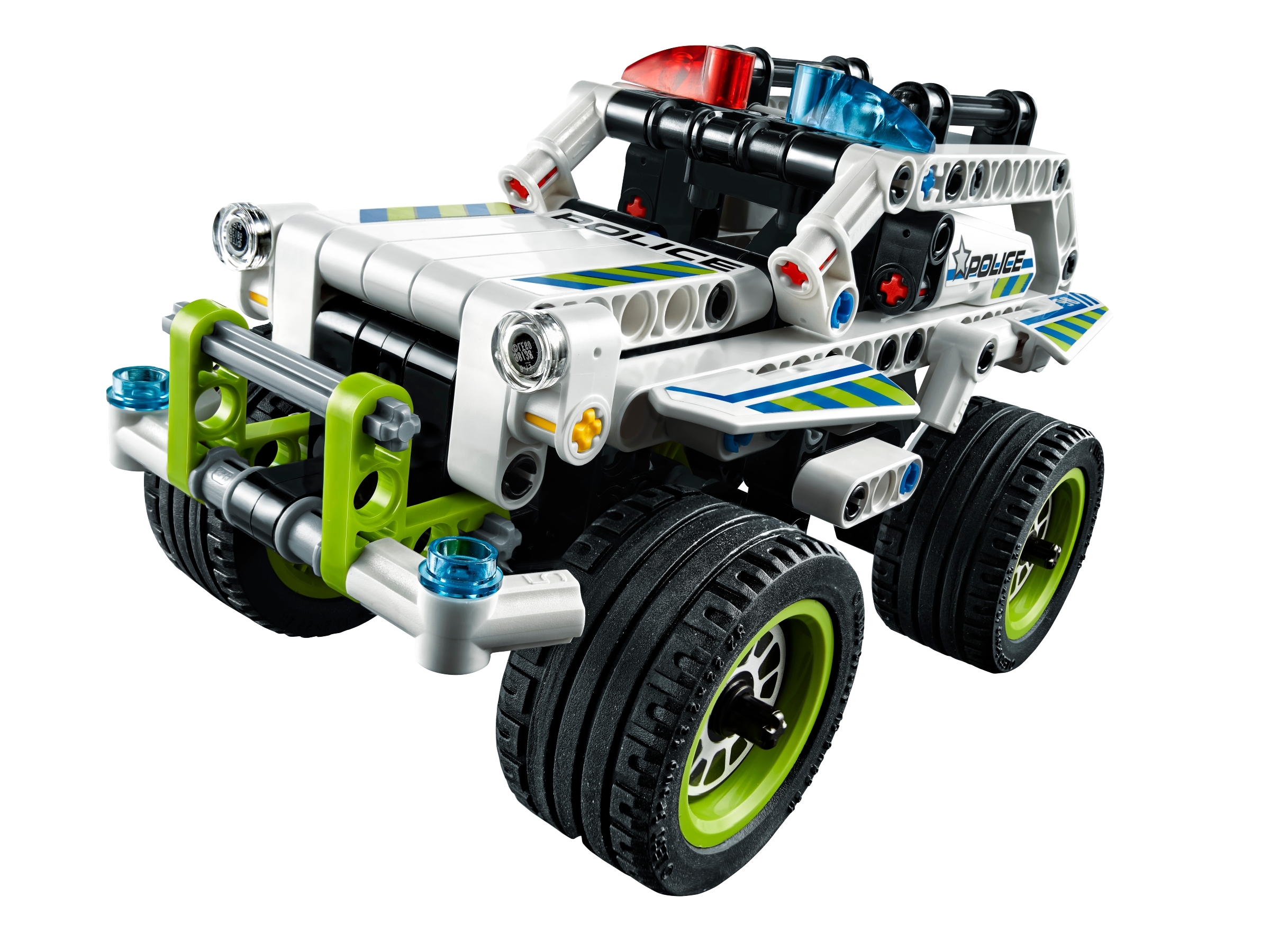 Comes with a pull-back motor, extra-wide rims, low-profile tires and police stickers that children will love.

This is another LEGO Technic building kit that is a little cheaper than most. The LEGO Technic Police Interceptor also comes with a pull-back motor and extra-wide rims. The tires are low-profile and it comes with police stickers children can use to add some detail to their model.

On top of being cheaper, this model is also a little easier to put together, making it a good place to start for children with little to no experience. 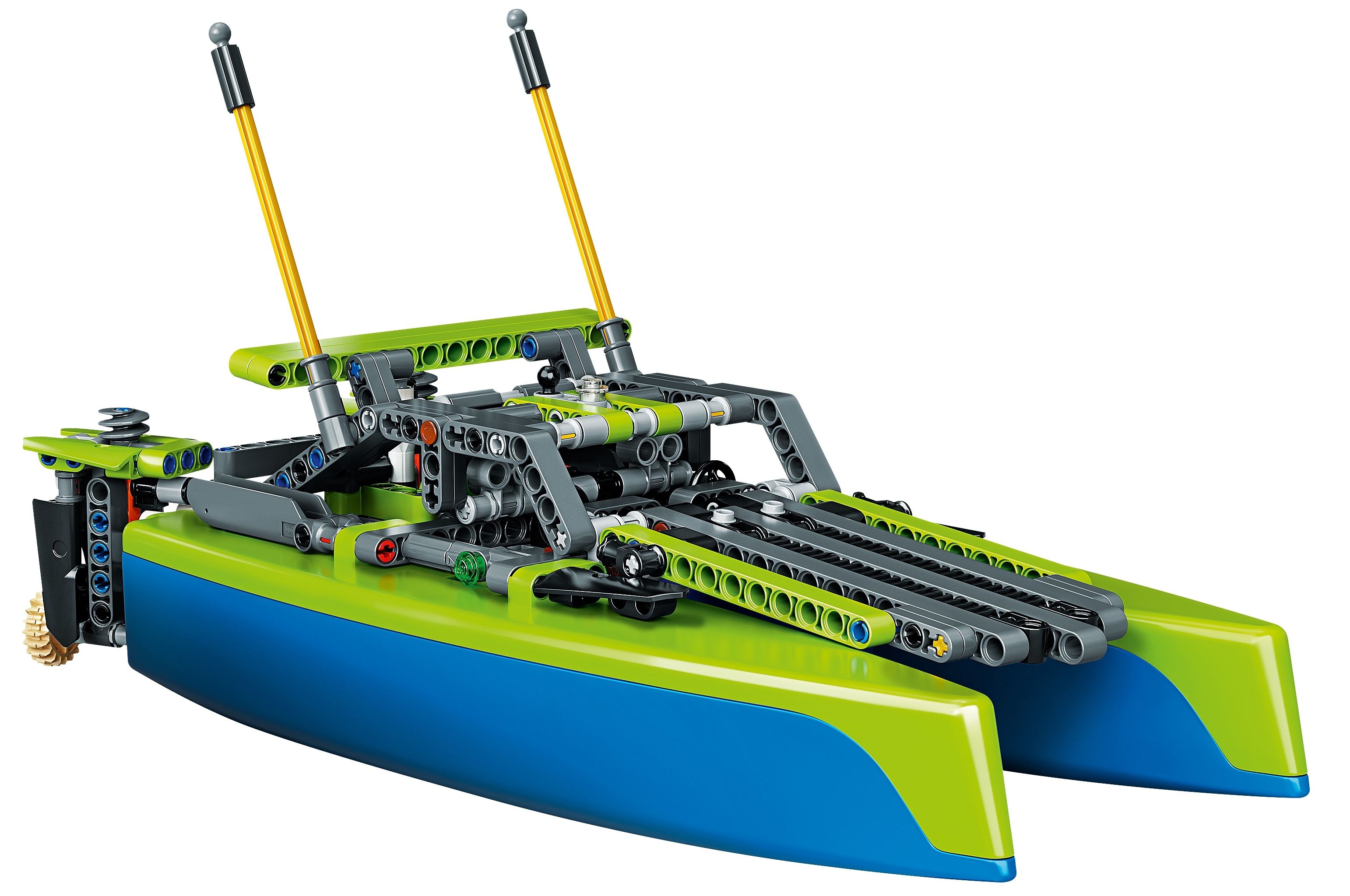 A brightly colored and well-designed replica of a real-life sailboat.

The LEGO Technic series is replete with automotive vehicles. At the top, we highlighted an aerial vehicle. Now it’s time for a seafaring vessel!

LEGO Technic Catamaran Sail Boat 42105 is a fresh take on the Racing Yacht 42074, which was recently discontinued.

I am personally at a loss as to why LEGO discontinues any of their products. I’ve never seen any manufacturing defects, and customers are always unanimously thrilled with these sets!

Be that as it may, the Catamaran set was released just last year (2020). With 404 pieces (74 more than the Yacht set had), it allows you to build a functional boat that you can actually sail in your bath tub or in a pool.

And it’s half the price of the Yacht Set!

Your kid can play around with the sails, raising, lowering or angling them for different speeds. It’s very affordable, so it’s not a bad idea to get two. Then they could race the catamaran against the speed boat and compare their features and construction. 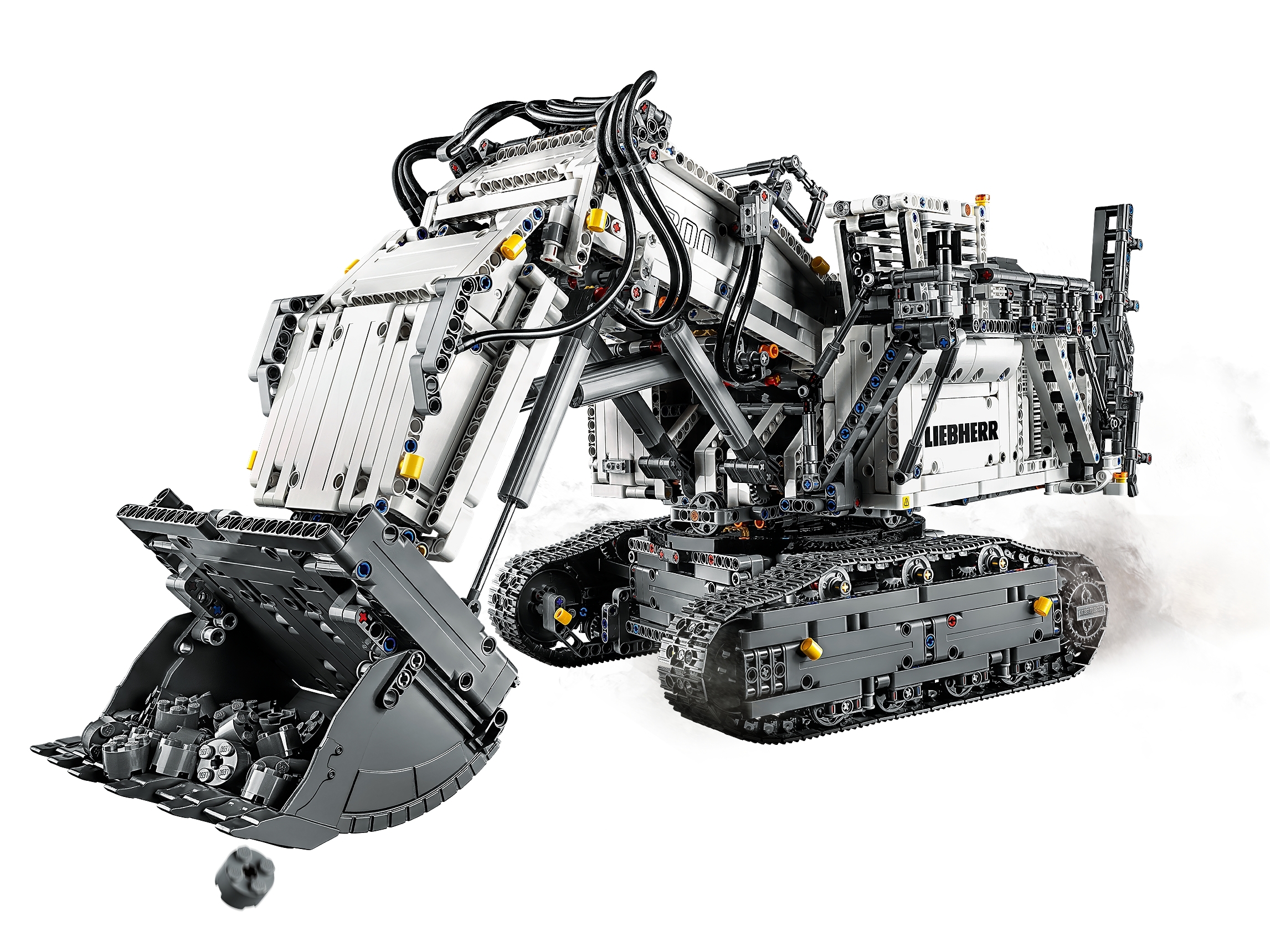 A super powerful LEGO kit that contains 4100 pieces that can be built into a realistic scale model of a Liebherr R 9800 Excavator.

Finally, we have the grandaddy of LEGO Technic sets.

This build is not for the faint of heart! The LEGO Technic Liebherr R 9800 Excavator has over 4,100 pieces! In fact, at the time of writing (updated Feb. 2021), this is the largest LEGO Technic set available. No wonder it’s recommended for ages 12 and up.

Not only is this a realistic scale model of a Liebherr R 9800 Excavator, but it also has 2 advanced Smart Hubs and 7 motors which allow it to be operated via a dedicated mobile app.

Standing at 15 inches high, 25 inches long and 10 inches wide, this monster engineering kit is big enough for your kid(s) to start digging a pool in your backyard! Control via the app is incredibly sophisticated, providing 4 control screens and even giving real-time feedback with data such as drive distance and power usage.

It doesn’t compete with LEGO Mindstorms 31313 or 51515 though – there is no ‘robot brain’ that allows programming of autonomous behavior.

Nevertheless, this LEGO Technic set is an engineering marvel in its own right that will provide hours upon hours of STEM fun and learning!

Which of These LEGO Technic Sets Would You Get?

It may be challenging to pick just one since they all offer so much fun and learning! The great thing is, LEGO has such high standards – there aren’t any bad Technic sets!

Currently, there are dozens of LEGO technic sets available. All are designed for children to use independently and teach some basic engineering skills. These sets do not require any STEM knowledge and very little parental help.

While they are a little bit more challenging to put together than most LEGO sets, they create exceptional learning opportunities for children with little to no previous STEM experience. Plus, the approachability of LEGO makes them an easy transition towards more sophisticated STEM toys. What is a LEGO Technic set?

LEGO Technic is a LEGO system that features sophisticated components that can mimic the mechanical aspects of modern machines. LEGO Technic sets include special pieces, such as gears, cogs, axles, winches and the like.

How old is LEGO Technic?

LEGO Technic was originally introduced as the Expert Builder Series in 1977 and was renamed “Technic” in 1984.

Yes, generally. LEGO Technic sets include many ‘standard’ LEGO pieces and are therefore compatible with other, normal, LEGO blocks. The LEGO Technic pieces are designed to interface with each other, eg. a gear with another gear, a cog mounted on an axle, and to interact with regular LEGO blocks.

What is the biggest Lego Technic set in the world?