Ticket to Ride holds a special place in my heart. It was one of the first ‘proper’ board games I was introduced to. It’s probably responsible for my current obsession with board games. I also know that this is true for many of my gaming friends. This is why I’m so excited to tell you all about this game.

There are a lot of different versions of this game. The version I’ll be talking about is Ticket To Ride Europe, as that’s the one I have at home. While there are some differences between the different versions, the major difference is the map you play on. The mechanics remain largely the same across the other versions. The feel and the spirit of the game certainly hold up across the different iterations of the game. 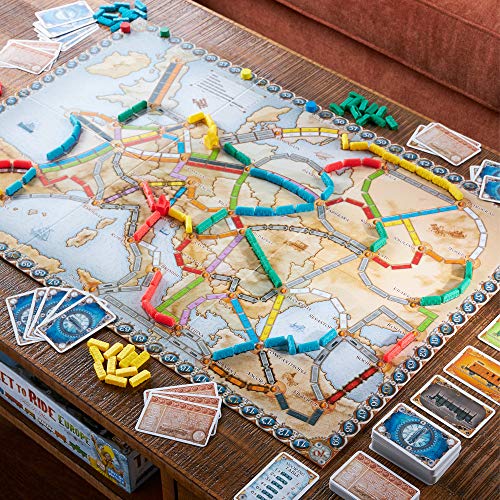 An exciting board game that can support up to five players.

You get a lot in the box as this is a big game that’s going to need a lot of space. It’s really a dining room table-sized game. We squeezed around my sewing table to play as the dining room table was filled with kids’ art projects. I do recommend using a bigger table though it helps to be able to spread out.

The boards that come with Ticket To Ride are lovely things. They are maps of the area in question with colorful rectangles marking out the train lines. Honestly, they’re great for helping you brush up on your geography. The Ticket To Ride board is one that has s scoring loop around the outside. So you can keep score as you go along to make the count up at the end go a little quicker.

The game supports up to five players. Each player has a set of 45 trains, 3 stations, and one wooden scoring marker. The trains and stations are made from plastic. They’re quite pleasing models. If you’re anything like me, you’ll stay happily entertained between your turns stacking and arranging them into patterns. It’s worth noting that you also get extra trains for each color. That way, if one or two get misplaced, you can still play – a very nice touch.

As well as the hundreds of trains you also get a total of 158 cards. 110 of these are the train cars that you use to buy train routes. There are 46 destination ticket cards. These tell you which two destinations you’re trying to join together. There is a summary card that reminds you of the scores for each length of the route. Finally, there is a card for the person who wins the longest train at the end.

How To Play Ticket to Ride Europe

To win Ticket To Ride, you need to collect the most points. You do this by building a railroad empire. You get points for buying train routes – the longer they are, the more they’re worth. You also get points for connecting the destinations on your tickets. Finally, there is a bonus of 10 points for the player who has the longest continuous train at the end of the game.

Setting up is quick and easy. Each player takes their trains and stations, then puts their scoring marker at the start. You give everyone 4 train cards, one long-haul ticket, and two short-haul tickets. Then you take the rest of the train cards and turn over the top five leaving the rest as a draw pile beside them.

At the start of the game, you get 3 tickets. Each ticket has two destinations on it and a point value. You’ll have one long-haul route and two shorter ones. Once everyone has their tickets, you’ll see a lot of peering at the board trying to figure out where all the destinations are. You must keep two tickets, but you can keep three if you want. You can also get more tickets later in the game to help boost your score.

The train cards are the currency of the game. You use them to buy the routes. You need as many cards as there are spaces on the route. If the route is colored, your trains need to match. If it’s grey, you can use any one color you want to buy the route.

As well as trains in each of the 8 different colors, there are locomotive cards. These are wild cards and can be used as any color train. In some versions of the game, there are ferry routes that require you to have a certain number of locomotives to buy the route.

There are also tunnels. These are routes with thick black borders. Tunnels are a bit of a gamble. You might need extra trains to make it all the way through. But if you don’t make it, you do get to keep your trains and try again later.

On your turn, you can only take one action. This means that play moves quickly. There are four choices.

You keep taking turns until one player only has two trains left. At that point, each player gets one final turn, and the game ends.

The more players you have, the longer a game lasts. For speedy players who know what they’re doing, you can probably get it done in around 30 minutes. For larger groups and those who are a little unsure, you should expect a game to last more than an hour, but no more than 90 mins.

Ticket To Ride Europe can be played with 2-5 players. This is true for most of the different versions, with a few exceptions. I find that the most enjoyable games are when you have 3-4 players. With this number, there are enough trains on the board that routes get taken, and the stations come into play. You can still have a good game with two players; there’s just a little less you can do to cause each other problems.

The suggested age on the box is eight years old. However, I think that this game would be great for younger kids as well. The basics gameplay is really about counting and color matching.

If you want to make it as simple as possible, you could just leave out some of the rules. For instance, if you put aside the destination tickets, kids as young as five could learn this game with no problem. Once they have the hang of it, you can introduce the destination cards back to the game.

Ticket To Ride has been around since 2004, and since then, it has spawned an enormous range of variations and expansions. At the time of writing, there are 21 different versions in print. So, I’m not going to mention them all here; you have other things to do with your life. Instead, I’m going to mention a couple of the most notable options.

Ticket To Ride: Nordic Countries is an excellent option if you will only be playing as a small group. There are more rules which increase the amount of strategy required. This makes it a much more exciting game to play, even if there are only two of you.

This expansion can be used with any version of the game. It introduces two monsters who stop you from buying routes into certain cities. You can give up precious cards and turns to move the monsters. This adds an extra level of strategy to the game and really pushes it to a new level for more experienced gamers.

If you want a more compact version of Ticket To Ride, you should check out the card game version. It will feel familiar to anyone who’s played the base game, but it has its own unique flavor. It’s a much quicker game and takes up a lot less space.

When I choose a game or a TV show, I like to know what other things are like. It helps me decide if it’s worth giving it a shot. With Ticket To Ride, I honestly think that every game collection should have at least one version because it’s a pretty classic game. But if you’re not sure, it’s quite right. Here are some other games that appeal to similar groups.

Ticket To Ride Europe is one of the few games I’ve found that works for practically everyone. I don’t think I’ve played this game with anyone who hasn’t enjoyed it. If you’re just getting into board games and are looking for a fantastic all-purpose game, then this is the perfect choice. If you’re a hardcore gamer already and haven’t played Ticket To Ride, then I insist you do something about it – you won’t regret it. 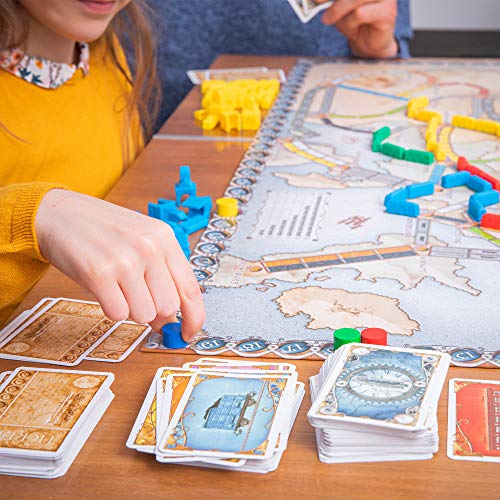 An exciting board game that can support up to five players.