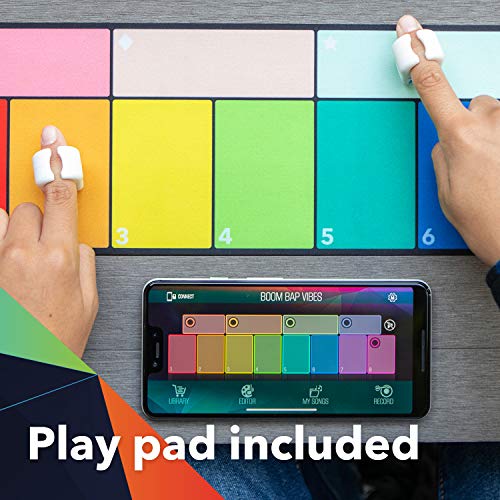 Sphero Specdrums is a dream come true for any kid and young adult who loves to make music. Especially for those who have a habit of drumming fingers on tabletops, walls, and anything else that will make a thumping beat.

Sphero may be widely known for their programmable ‘bots, but their attempt to diversify into the world of STEM is a success. Cleverly called Specdrums, this app-connected musical ring makes a variety of chosen sounds when it’s tapped (drummed, so to speak) on the color spectrum.

Basically, you tap a color and you hear a sound. You can experiment tapping on anything, including clothing, paintings, nature, or the supplied playing pad, which is decked out in the colors of the rainbow. Tapping a yellow banana would make the same sound as tapping a yellow LEGO box, but sometimes the shade varies.

And that’s part of the experimentation. The app allows you to choose from an extensive library of different styles of music, sounds, and genres. You can play it anytime, anywhere.

Sounds pretty cool, right? We thought so, too. So, here’s how to “make the world your instrument.”

What’s in the Box?

Tucked away in a compact, organized box, the SpecDrums comes with the essentials:

It’s easy to unpack the items, and the box isn’t unnecessarily bulky and filled with useless paraphernalia. Sphero seems to keep it relatively simple with packaging, which is a breath of fresh air from most companies.

There are plenty of key features to the Specdrums besides the ability to play a variety of music for all different interests. It’s very portable, versatile, and easy to use because of it’s small, lightweight size and the ability to use objects other than the play pad.

The ring itself is very well-made, soft, and smooth to the touch, and comfortable to wear because of the high-quality silicone. It’s highly adjustable, and, from experience, fits nicely on a 6-year-old finger through to a middle-aged ‘working man’ finger. The sensor is very sensitive to color and touch, and it is delightful to hear it facilitate music when you’re using items from around the house or school.

The colorful play pad ranges in the colors of the spectrum, which is practical and aesthetically-pleasing. It feels durable and soft, like a quality mouse pad. The pad comes with a small hook and loop fastener for convenient storage. It may have a little curl at the ends from being stored for a while in a box, but it doesn’t inhibit playing. After some use, it eventually relaxed.

The Charger and Bag

The micro USB charger is very short, approximately 5-6 inches long. This would make it difficult to play while it’s charging, but luckily it has a two-hour playtime before the Li-ion battery runs out. By two hours, the player is most likely ready for a Specdrums break anyway, so perhaps Sphero put this into consideration when adjusting the battery life.

The ring is not charged fresh out of the box, so once it’s plugged in to charge, it will take at least an hour for the tiny red light indicator to turn green.

The drawstring bag is very convenient and keeps the ring and charger protected when you’re traveling or it’s not in use. It’s large enough to only hold the ring and the USB charger as well as a small USB wall plug (not included), so the play pad is left without a protective case. This is why it’s important to roll the play pad up and secure it with the fastener after use. If you’re very particular, the product box can be used as a storage container since it has a convenient plastic handle.

And here’s where we get our creative juices flowing. Without connecting to the app, the Specdrums is basically worthless. From Sphere’s SpecDrum Mix app, you can utilize a large library of instruments and genres of music that help the budding musician play DJ.

According to the instruction card, you just need to download the app. It didn’t have any instruction from here, so I found the app on the Sphero website and went from there. There are a few Sphero apps to choose from in iOs and Google Play, so the website instructed which app to use for the Specdrums.

Both of these apps are compatible with Specdrums, but I will focus on the Mix app. Although, I do feel that the Specdrums EDU app would be much more engaging and ‘educational’ than the Mix app, which holds the library of music and instrument choices and is where you can record and save your musical creations.

The Specdrums Mix app opens up with asking you to connect your charged ring to the app. This is BlueTooth enabled.

The app will then show you how to use the Specdrums ring, play pad, and app. This will not show up every time you go into the app to use your ring. Consider it a Specdrums rite of passage!

The final note shows that you can’t really play on black or dark colors, which my 6-year-old observed that this is possibly why the box’s interior and the drawstring bag are both black. Already making connections!

Once you’re in, a digital version of the play pad appears on the screen. This gives you the option of playing from your phone or tablet if you don’t have the play pad handy. You also don’t need the Specdrums ring to play the digital play pad. Keywords: portable and versatile!

Going into Library takes you to a world of options. Here you will find a large collection of music genres that allow you to change the music that your Specdrums ring makes. The vertical keys on the play pad make individual sounds, and the four horizontal bars at the top play different beats while you make sounds. With this trick, you definitely feel like a DJ.

Once you’ve downloaded the music file you want, it’s available in your library with just a tap of the finger. Each file comes with specific beats and individual sounds that can be played on the play pad. There are tons to choose from and they’re all free with the app.

When clicking on Editor, you will have the option of changing the individual sounds associated with the play pad colors. If you want red to say, “Hey!” or a loud bird chirp or a cello string pluck, then you can set this to anything red that you tap with the ring.

Press X to go back to the main play pad screen. Once you’ve played around with some sounds and beats, pressing record will record your music creation until you press stop. Press playback to hear it, and you’ll have the option of saving it as your own file.

Overall, the Sphero SpecDrum is a very cool musical sound experience. We have fun with it, and I feel that older kids who are more musically inclined, especially budding DJs, will get very creative. It’s very well-made, aesthetically-pleasing, and it makes the kids look at colors from a different perspective, “I wonder what sound I could make with that?”

My only hesitation is that we would have way more fun with an additional ring. Having at least two rings would open more musical doors since it would allow the user(s) to tap for sounds and beats simultaneously. There is a two-ring version available, and even better, Sphero offers a classroom pack that would be a phenomenal addition to any elementary, middle, and high school STEM (or music) class. But if the budget only allows for one ring, it will most likely get a lot of use if the user has the drive to make and record music.

In our case with younger kids, our Specdrums is used to wow and amaze visiting friends. Creative family members also like to challenge each other in creating the best beat, and sometimes they’re so awful it has brought on some good-spirited belly laughs. 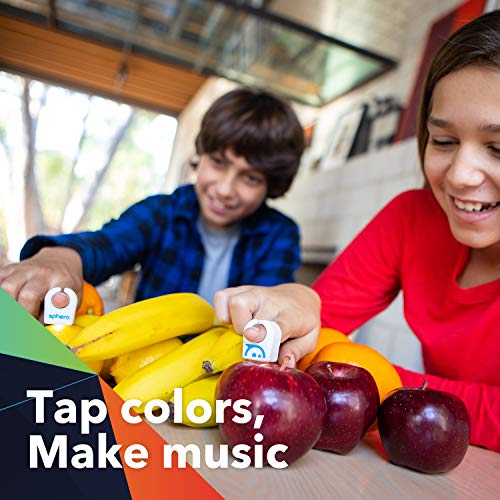 What age is the Sphero Specdrums for?

The Specdrums is suitable for nearly all ages from six and up, but it’s targeted more towards elementary-aged kids. From our experience, anyone who is a visual learner and likes music will learn from it.

Will this work from an iPhone or Android?

Yes, it will work for both. When downloading the app, you can find it on any iOs or Google Play.

What size does the play pad roll down to?

The play pad is made from a durable mouse pad-like material, and it can be rolled up quite tightly to about 1-2inches in diameter. It’s not recommended to fold it as the foam is too thick for compact folding.

Yes, the Specdrums app works off of Bluetooth. You can still use headphones when the app is in use.

How many rings can you have connected at once?

According to Sphero, you can connect up to four rings per device. The rings do not have to be from the same box, either. They can be purchased separately and used simultaneously on one device.

Can I create my own sounds to use?

Yes! This is a pretty cool feature you can use when you click on “Editor” in the app. From there, you can also set the sound to a color or a number.

Where does the sound come out of?

The sound comes out of the device your app is playing from, like a tablet or a phone. If you have a speaker connected, then it should play from there.

Can I take SpecDrums anywhere?

One of the cool things about Specdrums is that you don’t need the foam play pad to make music. If the ring is connected to the app and the app is turned on, you can tap the ring onto anything to make sounds and music. You can also just use your finger to tap on the digital play pad from the app.

What is the educational purpose of Specdrums?

Sphero makes very cool robots and educational tools that give kids a different perspective on the world around them. Specdrums is a unique way of bridging technology (hardware and software) with the color spectrum while giving them problem-solving skills and creativity. It’s working the left and right brain simultaneously!

Miranda Altice is a science writer and Master Naturalist with degrees in marine biology and journalism. She has over 15 years of experience teaching hands-on science classes from pre-school to high school. When she's not weaving words into gold, Miranda can be found rehabilitating marine animals at a local wildlife hospital, combing the beaches with her two kids, or pretending to be a mad scientist.