Carcassonne is a tile-placement game. You build the board and the world as you go. Players score points by placing their follows in different positions. It’s a really versatile game and plays well with 2-6 players.

This is a perfect game for playing with families because you can try lots of different strategies. You’ll find yourself deciding if you place a tile to help yourself or hinder your opponents. Then there’s the question of how to best use your small supply of followers. No matter what age you are, this is a game you can get something out of. I think it’s a great mix of skill, strategy, and a sprinkling of random luck to keep it replayable.

The setting of the game is the region of Carcassonne, in France, during the Middle Ages. Don’t worry if you don’t know anything about the history involved. It just lends a backstory to the game. The idea is that as you play, you are developing the area by placing roads, castles, and monasteries. Then with the combination of tile and follow placement, you can amass the most points.

The game is straightforward to learn and has lots of different expansions to explore. I have the ‘big box’ version. This just means that it comes with 9 of the possible expansions as well as the basic game. If you simply get the basic game, the box is much smaller. 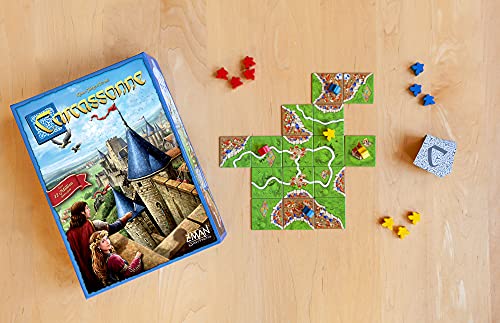 Straightforward to learn and has lots of different expansions to explore.

Related post: Kingdomino vs Carcassonne – Which Tile Game is Best?

Inside the box, you get 72 land cards. They are good-sized square tiles made from thick card stock. On the land cards, you can see roads, fields, monasteries, and city sections.

There is a scoreboard for keeping track of your score as you play. This is essential because, unlike other point-based games, you can’t just do one big count-up at the end. You need to keep adding up points as you go, making it a good game for practicing some basic mental arithmetic.

There are also a few tiles with the numbers 50 and 100 on them. These are to help with the scoring. The scoreboard goes in a loop with the numbers 1-49. Once you’ve made a complete loop, you take the 50. If you make it round again, you get the 100.

There is a total of 48 player pieces. These come in 6 different colors and are shaped like little people. If you’ve ever come across game pieces being called ‘meeple,’ well, these are the original meeple.

How To Play Carcassonne

Setting up the game is quick and easy. You first find the start card. This is a tile with a darker background. You start with this tile because no matter which tile is picked next, it will fit next to this one.

The rest of the tiles are mixed and then stacked into face-down piles around the space. Each player takes the tokens in their color. They have 7 to play with and one that is their marker on the scoreboard. Tradition says that the youngest player then starts the game.

On your turn, you pick up one of the face-down tiles. You can decide how you place it, but it must continue the other tiles’ picture, e.g., a road can’t join a field. It’s very rare, but if everyone agrees that there is no possible place for a tile to go, it is discarded. The player then gets to draw another card.

Once the tile is placed, the player can choose to also position one of their followers. But, they can only go on the tile, just players. After the follower is placed down, any completed roads, monasteries, or cities are scored, and the followers returned.

So let’s talk a little bit about the different ways followers can be used. Depending on where you place the follower on the tile, they become a different type of person. There are thieves, knights, monks, or farmers. They all work and score a little differently.

Monks are placed in monasteries. When completed, these score one point for each tile that touches the monastery as well as the monastery itself. These are scored when they are finished or you run out of tiles. You get the follower back once the monastery is complete.

Knights are placed in cities. Cities are scored at full worth if completed or half points if incomplete when you run out of tiles. You get 2 points for each tile that contains part of the city. Some city tiles have a crest on them. These are worth double points. You get the follower back once the city is complete.

Farmers are a little different. Once you place them, you don’t get them back, and they don’t score any points until the end of the game. These can be one of the more challenging elements of the game to get your head around. Farmer score 2 points for every completed city that their field touches. It’s impossible to predict how the fields will unfold, so these can be a bit of a gamble to play, as you don’t get them back.

Because you’re growing the board as you play, it’s possible for more than one player to end up with a follower in a field, road, or city. If this happens, it becomes a bit of a battle. The player with the most followers gets all the points. The rest get none. If two or more players have the same number of followers, they all get the full points. This means it can be worth trying to win a city from someone else, so you get the points, and they don’t.

The game ends once all the tiles have been played.

A game of Carcassonne usually takes around 30-45 minutes to play. Because it’s based on the number of tiles, this length is pretty consistent regardless of how many players you have.

Carcassonne is a great game to have in your cupboard because it’s so versatile. You can play a good game with anywhere between 2 and 6 players. The fewer players you have, the less conflict over features there is likely to be. With more players, you’ll need to be far more tactical and won’t win with the same tactics of a 3 or 4 player game.

I’ve not found a group size where this game falls flat on its face. It just offers different experiences.

The age recommendation on the Carcassonne box for the base game is 8+. Personally, I think kids as young as 6 would be able to enjoy the game. You might want to omit the farmers as they can be a little challenging to score for younger kids. Otherwise, the basic game is pretty accessible and offers a great introduction to strategic thinking and mental maths.

The more expansions you use, the more complicated the game becomes. Even adding one can add quite a lot of complexity to the game, so you’d be better served saving those for kids over the age of 13. Of course, the expansions mean that you can make the game as complicated as you want, so it really does work well for all ages.

There are a lot of different expansions of Carcassonne. It’s a beloved game that has been around for a long time. There are more than 10 large expansions to choose from. These typically add at least 15 minutes to the game through a combination of extra tiles and mechanics.

As well as the large expansions, there are well over 30 mini-expansions. Typically these will add 5-10 minutes to the game. Again this is through a combination of more tiles and some simple, added mechanics.

Since you can mix and match the expansions, you can create a mind-bending number of different versions of this game. 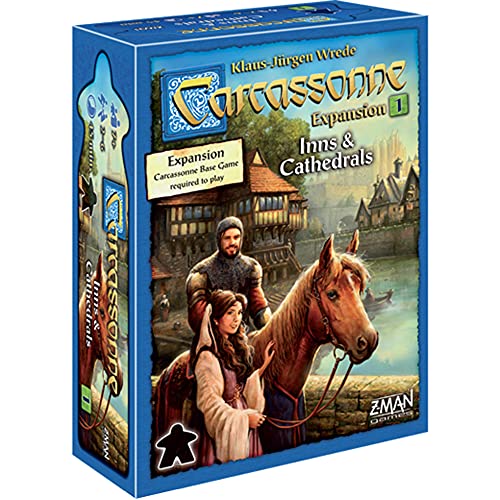 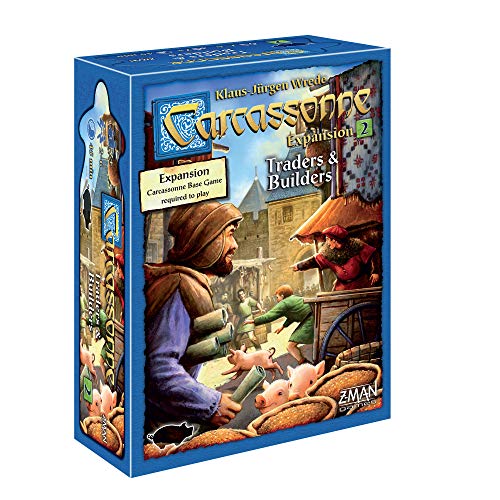 The Tower: Carcassonne exp. 4
Build imposing structures that touch the sky in this Carcassonne expansion.; The Tower gives players a direct, strategic method of interacting with other players. 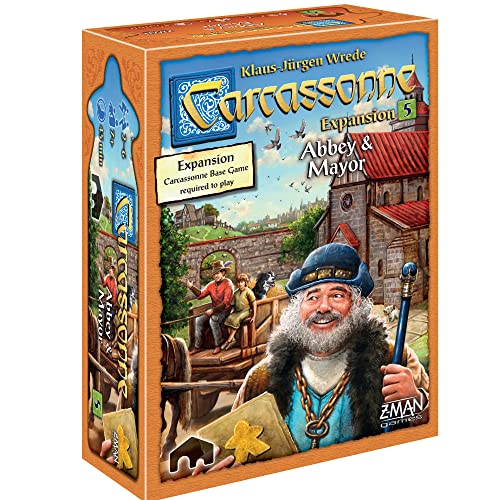 If you’ve tried Carcassonne and are looking for games with a similar feel, here are a few suggestions. Each of these has at least one element that makes them feel similar to Carcassonne while still offering a unique gaming experience.

Carcassonne is a great gateway and family game. It’s easy to learn and offers a very different game experience to more traditional dice rolling games. The base game works really well on its own and is very replayable. It’s a game of skill, but the randomness of the tile drawing introduced an element of luck that keeps the game fresh without just reducing it to pure chance. I think this is a great game that you can’t go wrong with.