Which games are worth your time and which games should you keep on the shelf? Our vote goes with Gloomhaven — a game that encourages players to use different useful tactics to win a complex campaign.

With our handy guide, you’ll be scratching that tabletop RPG itch in no time flat!

Our Top Picks for Best Board Games Like Dungeons and Dragons 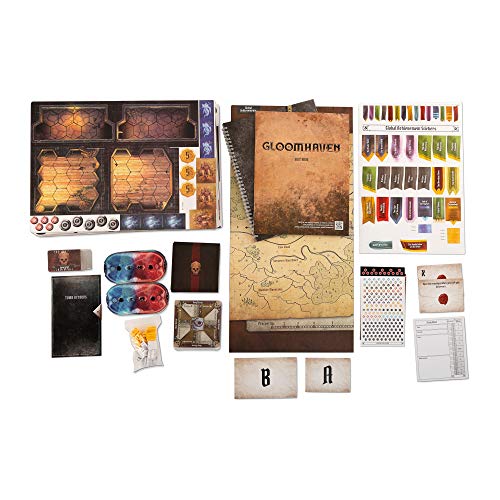 This game perfectly mixes tactical combat and roleplaying decisions into a complex campaign you can play right out of the box.

If you really want Dungeons and Dragons in board game form, then Gloomhaven is your best bet. It offers very engaging tactical combat so that you never get bored. At the same time, there are awesome roleplaying opportunities and an ongoing campaign to perfectly stimulate that Dungeons and Dragons feeling. And it’s fully cooperative -you basically play against the game, so no Dungeon Master is needed.

Part of why we love this board game so much is that it is ready to go right out of the box. While setting up games can take some time, you’re not going to have to purchase a bunch of miniatures and accessories before you can play. Hence the high cost: Gloomhaven is the most expensive of the games like Dungeons and Dragons, but it’s worth every penny! 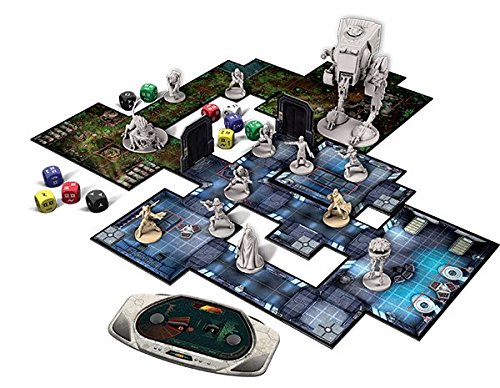 Lets you take control of new heroes and fight new villains in a campaign that is different each time you play.

Want to lure in some friends that are more into Darth Vader than Dungeons and Dragons? In that case, Star Wars: Imperial Assault is going to be your best bet!

Like Gloomhaven, Imperial Assault offers a mixture of tactical combat, roleplaying, and a constantly changing campaign that you can play right out of the box. One player assumes the role of the evil Empire, while up to 4 other players assume the role of plucky Rebel heroes.

Part of why this is our premium pick is that there are so many extras you can (optionally) dive into. This includes new miniatures to paint and new expansions to buy. Best of all, you can play those expansions as their own miniature campaign or mix and match new characters and missions to create even more new adventures! 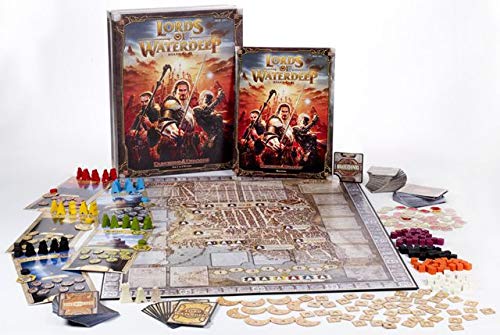 Allows you to take control of a powerful lord in the Dungeons and Dragons universe as you fight for wealth and power.

If you want Dungeons and Dragons board games, why not go with something official? Lords of Waterdeep is an official D&D board game. At the same time, it puts a new twist on the old formula that may be enough to entice even the most veteran players!

Instead of playing as the traditional classes of roleplaying games (like wizards, rogues, and fighters), you control one of the titular Lords of Waterdeep. In this role, you’ll complete schemes and plot against other players in an attempt to build up your wealth and reputation.

As of this writing, Lords of Waterdeep is currently the cheapest of the D&D-inspired tabletop games on this list. And it offers amazing value because while you can learn to play this board game very quickly, it may well take years for you to master!

Best for Fantasy Fans — Lord of the Rings: Journeys in Middle Earth 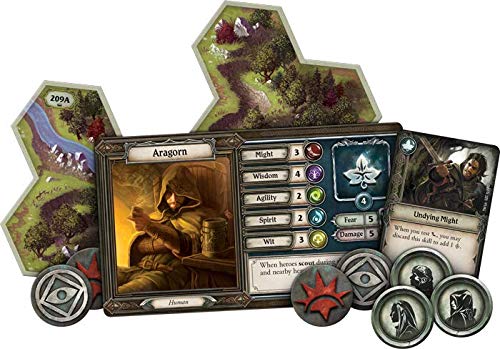 Lord of the Rings: Journeys in Middle Earth

This Lord of the Rings game combines the best of card games and board games in a miniatures-driven cooperative campaign that you play with the help of an appropriately cinematic app.

Because you’re basically playing against the app (no Dungeon Master required), this fully cooperative game can be played with up to five players or even by yourself. And there are a variety of heroes, villains, and scenarios to greatly enhance the replay value of the game.

The combination of cards, miniatures, and board game tiles helps bring Middle Earth to life. Part dungeon crawler, part Dungeons and Dragons board game, this fantasy game will quickly become a favorite for your entire group! 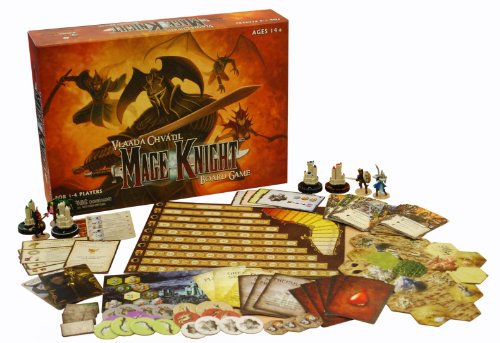 This game mixes exploration and conquest with a beautiful, fantasy-inspired setting. But its complexities are best reserved for veteran gamers instead of beginners.

Conquered Gloomhaven and want something even more complex? In that case, the Mage Knight Board Game is a great choice!

It comes with everything you need for 1-4 players to enjoy an awesome dungeon crawler of an adventure. Combat is engaging, exploration is fun, and the painted miniatures look stunning right out of the box!

Just be warned: this is one of the most complex games on our list! 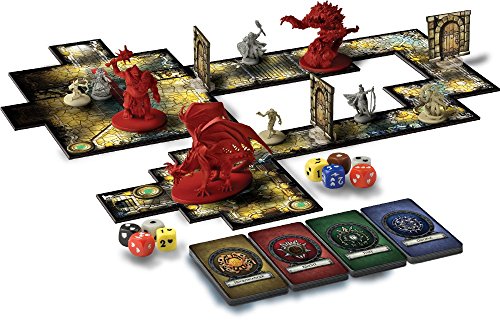 Descent: Journeys in the Dark

This game is nothing short of a fantasy campaign in a box! And just like Dungeons and Dragons, you get a chance to develop your character as time goes on.

As with its sci-fi successor, one player serves as a kind of villainous DM while up to 4 other players try to stop him. You can enjoy each game as its own separate adventure, but the real fun comes from developing your characters across a long, rewarding campaign. 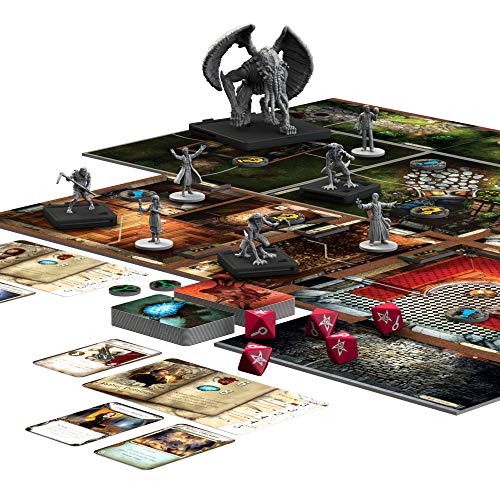 This game combines a modern setting with horror gameplay. If you’re watching Lovecraft Country, this game is a must play.

Most of the games on this list are set in medieval fantasy settings, much like D&D. However, Mansions of Madness (2nd Edition) has a modern setting you’ll find quite refreshing.

This cooperative Lovecraftian adventure supports 1-5 players and features a variety of intriguing campaigns. You’ll need to download a separate app to play, but it simply enhances the horror atmosphere as you and the other characters solve puzzles, gather items, and ward off madness (or not). 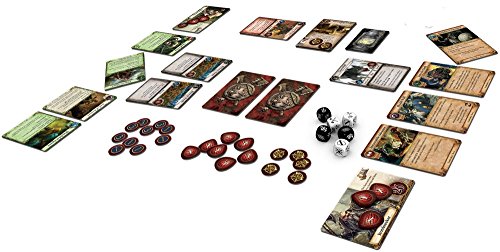 This card game brings the Warhammer miniature game flavor to a card game full of heroes, monsters, and an unforgettable campaign.

Strictly speaking, Warhammer Quest: The Adventure Card Game is less like traditional board games and more focused on cards (hence the name). But it provides a fun, immersive RPG experience that you can enjoy right out of the box.

You can solo this particular adventure or bring up to 3 friends along. And it is a fully cooperative experience, making it a great choice for casual gaming or gaming with your less competitive friends. Just be warned: the fun of this game is a slippery slope into the sprawling world of Warhammer! 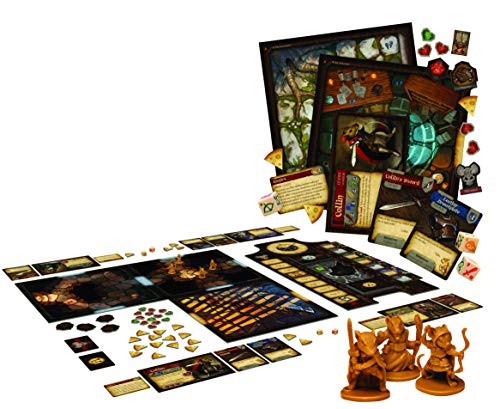 An unforgettable fantasy adventure with a ton of personality and charm.

What if you had Dungeons and Dragons: The Board Game and made it all about warrior mice? Then you’d have Mice & Mystics, an unforgettable fantasy adventure with a ton of personality and charm.

Mice & Mystics is unlike anything else on this list. Instead of controlling familiar personalities like humans or orcs, you and up to 3 other players take control of anthropomorphic fighting mice. And while perfectly fun for adults, this adorable game is a perfect way to get younger players into the RPG experience.

Overall, there is a lot to love here. The miniatures are stunning, the themes are powerful, and the story evokes the best kinds of fairy tales. Even if you buy it for your kids, we can guarantee this game will win you over.

Best for Western Fans — Shadows of Brimstone: City of the Ancients 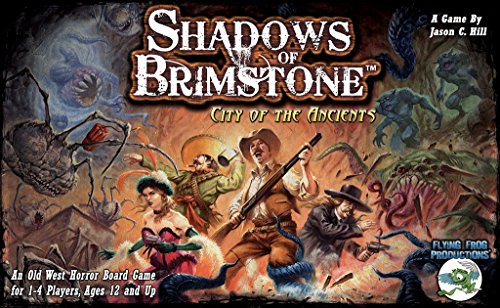 Shadows of Brimstone: City of the Ancients

Recommended board game for players looking for a bit of horror and feeling of Old West together.

Ever want to mix a bit of horror and a bit of the Old West together? Instead of firing up reruns of Westworld, you should play an engaging game of Shadows of Brimstone!

Shadows of Brimstone: City of the Ancients really wears its influence very openly. This is basically Gloomhaven, but it’s set in an Old West setting. And to make things interesting, this western setting is filled with demons and other horrors instead of boring bandits.

Beyond the great setting, this game features a perfect blend of exploration, combat, and adventures that never play the same way twice. The characters are great Old West archetypes (like Gunslingers and Saloon Girls), giving you a chance to do some real roleplaying in between rolling all those dice.

What to Consider When Buying Board Games Like Dungeons and Dragons

There are plenty of board games that simulate miniatures combat. However, having the best D&D board game experience gives opportunities to take on a unique role. Try to determine the proper balance of combat and actual roleplaying among you and your players.

It’s not uncommon for D&D sessions to last 5+ hours at a time. However, most players expect something a bit shorter from a board game. Pay attention to how long each session will take. And if you want a longer experience, look for games that offer campaigns.

Some board games simulate the D&D experience by having one player be a combination Game Master/opponent against other players. Other games are fully cooperative and you basically play against the game itself.

Both types of games are very rewarding, but cooperative games are usually better for casual gaming and newbie players. Consider what kind of game group you have before you throw them into a more intense competitive experience.

Why play these games instead of D&D?

While these are great games inspired by the D&D formula, none of them fully replace the traditional RPG experience. So why play these games instead of actually playing D&D?

The simplest answer is that players like variety. A good RPG campaign can last for years, even if you’re meeting every week. And players might get burned out doing the same thing, week in and week out.

These board games let your players have their cake and eat it, too. Each game involves some of the RPG mechanics they already love. But new characters, settings, and mechanics let them conquer new challenges when they aren’t busy playing their familiar D&D character.

Are there any downsides to playing board game campaigns?

Many of the games on our list replicate the D&D experience by incorporating a kind of campaign mode. This lets you play several interconnected adventures that are actually part of a larger campaign. Such an option is great for RPG veterans, so you may be asking: are there any downsides?

Much like an actual D&D campaign, the only real downside is keeping track of your progress from game to game. In some cases, this means either taking meticulous pictures of your setup or finding a place in your house to keep the game materials set up.

As you can imagine, keeping a table with all of your detailed terrain and miniatures and cards over a period of weeks or months isn’t always easy if you have a small or crowded home. In that case, we recommend sticking to pictures of your setup.

Is it boring to play by myself?

Many of the games on our list are suitable for 1 – 4 players. And that is quite literal, meaning you can play these games solo if you want. But is doing so really worth it?

The answer is both “yes” and “no.” These games feature beautiful miniatures, cards, artwork, and stories, and nothing keeps you from enjoying all of that on your own. And relaxing with a solo tabletop game isn’t really all that different from relaxing with a nice video game.

At the same time, much of the traditional RPG experience involves socializing and strategizing with other people. Playing on your own removes that element, but it also gives you a chance to master the game. And that may eventually make it easier to get some of your friends and family to join you on your next gaming adventure!

Chris Snellgrove is a professor by day and a writer by night. When he's not teaching or typing, he loves comics, video games, and cosplay. In other words, man-child achievement: unlocked.